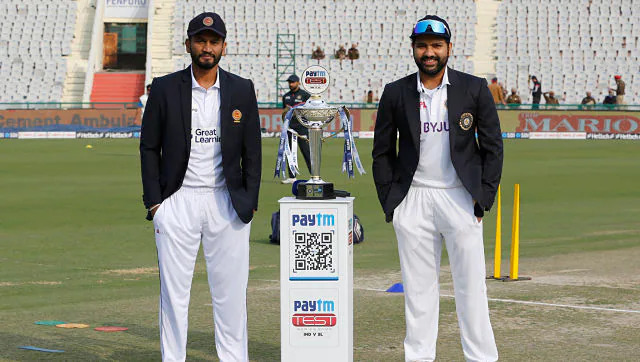 The Test series between India and Sri Lanka began at the IS Bindra Stadium in Mohali. Rishabh Pant took center stage with a sensational 96-run knock,  off 97 deliveries. All Indian batters got a start which allowed them to end the day in a formidable position at 357-6.

Rohit Sharma won the toss in his first Test as the captain of the team and elected to bat first. India named Hanuma Vihari and Shreyas Iyer in the middle order slots while R Ashwin was declared fit and was included in a three-pronged spin unit.

On the contrary, Sri Lanka opted to field only a lone specialist spinner and banked heavily on the pace unit.

Much like a regular morning on the first day of a Test in India, the conditions favored the batters with a hint of swing. The bounce and carry were relatively low, which allowed openers Rohit Sharma and Mayank Agarwal to establish a solid start.

The duo scored boundaries at will initially and were cruising at over 4 runs an over. Sharma was the first wicket to fall after attempting to pull Lahiru Kumara across the leg side for the third time in the over.

Lasith Embuldeniya struck quickly after getting into the attack. Mayank Agarwal was undone by an arm ball, getting trapped right in front for an LBW decision. The man of the moment, Virat Kohli, walked out to bat next and survived a scare off his second ball and slowly got into his groove.

Kohli and Vihari got through to lunch and were in command in the second session as well. The duo put on 90 runs for the third wicket before Kohli was bamboozled by a delivery that held its line by Embuldeniya. The former skipper fell five short of a half-century.

Vihari followed suit soon after dragging a delivery onto his stumps. Left-arm pacer Vishwa Fernando bowled a back of a length delivery from around the wicket to dismiss the batsman.

Rishabh Pant was promoted over Shreyas Iyer and the duo played out the remainder of the second session. The left-hander played with his usual gusto and targetted the spinners.

Shreyas Iyer was trapped LBW by Dhananjaya de Silva to send India to 228-5 early into the final session. The left-handed pair of Pant and Jadeja took charge as Sri Lanka relied on spin with the soft, old ball.

The wicket-keeper batter took the final session by storm with a relentless flurry of boundaries. He scored 22 runs off Embuldeniya’s over to race to the nineties. However, the new ball proved to be his downfall as Suranga Lakmal breached the gap between his bat and pad to get him bowled.

This was the fifth time that Pant (96) was dismissed in the nineties. R Aswhin and Jadeja finished the day for India in a commanding position of 357-6.