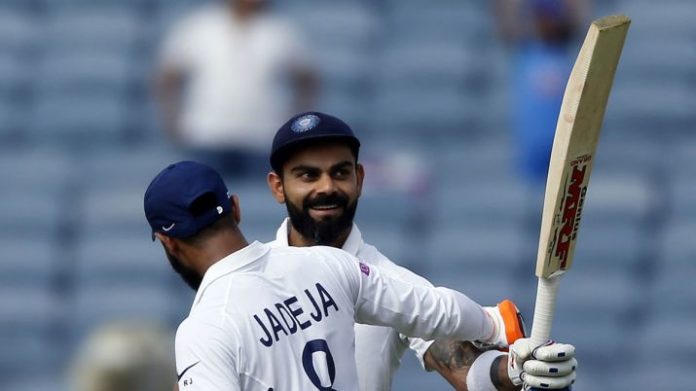 Virat Kohli brought up his seventh double hundred while Ravindra Jadeja got agonizingly close to a ton on a day that saw the South African bowling attack get battered. India capped off the day by tattering the visitors’ top order.

The Men In Blue cranked up the heat on the bowlers after haplessly scoring runs. Virat Kohli, who was unbeaten on 63 after the end of Day 1 scored runs freely to get to his highest test score, bettering his previous score of 243 against England in Mumbai.

The Indian skipper was accompanied by Ravindra Jadeja after vice-captain Rahane was dismissed for 59. The all-rounder scored at a brisk pace en route to his 91 off just 104 balls.

Virat Kohli was handed a second life after scoring his double hundred after it was observed that Muthuswamy had overstepped. The partnership for the fifth wicket accounted for 225 runs.

Declaring the innings at 601-5 with the skipper unbeaten at 254, the Proteas had to see through the final 15 overs of the day.

The returning Umesh Yadav struck straight away with the new ball by dismissing Aiden Markram. The pacer from Vidharba also managed to send Dean Elgar back to the pavilion as well. Mohammad Shami notched the wicket of Temba Bavuma to cap off a stellar day for India.