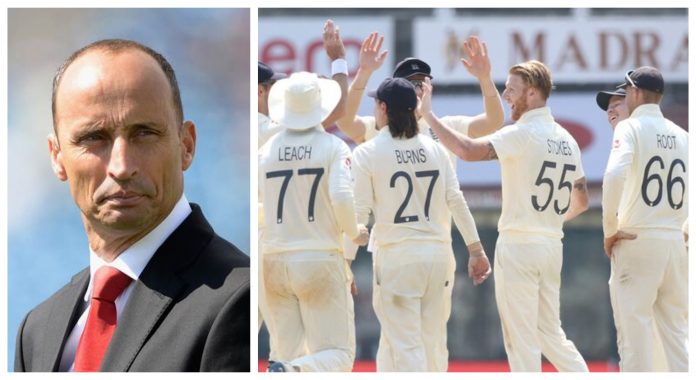 Former England captain Nasser Hussain bashed at the England team after seeing their team selection for the fourth and final Test against India at Motera in Ahmedabad. The Joe Root-led side brought a few chances as well where Ollie Pope and Dom Bess came in place of Jofra Archer and Stuart Broad in the playing XI.

However, the changes didn’t work as they were bundled out for 205 runs in the first innings on Day 1 with India spinners Axar Patel, R Ashwin, and Washington Sundar picking up eight wickets between themselves. Alongside them, Mohammed Siraj picked up two big wickets – England captain Joe Root and batsman Jonny Bairstow. And, Hussain said that their team suited for the third Test.

“Five times they have failed to make 200 in this series and now they’ve only just scraped past that modest total thanks to a couple of reverse sweeps from Jimmy Anderson. It just shows where they are with their batting in these conditions. It was almost as if England had picked a side for the last Test. They left out two of their seamers because they thought the ball would spin from day one again but as it turned out it did a bit for Mohammed Siraj and Ishant Sharma on the first morning,” Nasser Hussain wrote in his column on Daily Mail.

Meanwhile, he also said that the visitors should feel very lucky as they won the toss because bowling would have been tough for them with this attack. As he believed, England needed three seamers and the extra spinner in the game and he also claimed that the visitors didn’t read the conditions well too. Even, he applauded Virat Kohli’s captaincy as well.

“Virat Kohli’s captaincy is always better when India are ahead in the game so yesterday suited him perfectly. When he has two spinners and things are going well he is at his best but when his side are behind he gets ruffled and starts to follow the ball with his field placings. So England haven’t really tested him since that first Test,” Nasser Hussain concluded.