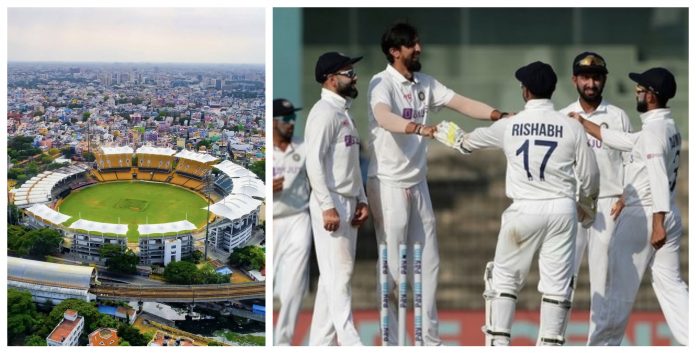 While Team India have been taking on England in the first Test at the Chepauk stadium in Chennai behind closed door, fans can enjoy the live-action in the second Test. The sale of the tickets for the second Test between India and England will begin from February 8.

However, the disputed stands – I, J and K, that was closed for the fans since 2012, will be open for the first time during this Test. It is also noteworthy that, the stadium failed to host T20 World Cup 2016 matches and IPL final of 2019 due to the legal issues with the stands as well.

“The redemption of online tickets will be from 10.00 a.m. on 11.02.2021 at Booth No.3 located on Victoria Hostel Road. Wearing face mask and maintaining social distancing are mandatory during visit for redemption of tickets,” it further read.

On the other hand, England players have produced a stunning show in the first Test against India. They have punished all the bowlers and put up a mammoth total of 578 runs in the first innings of the Test. To dismiss the players, every bowler had to work hard on the flat track as well for 190 overs. There Jasprit Bumrah and R Ashwin both claimed three wickets each.

Bumrah has bowled 36 overs and gave away just 84 runs and picked up three important wickets too. And former India cricketer Gautam Gambhir has said that Bumrah shouldn’t play in the next one and should be kept for the all important pink ball Test that will begin on February 24.

“I’m not even sure whether Bumrah should be picked for the second Test match. I think India should preserve him for the pink-ball Test match. See, Jasprit Bumrah is a X-Factor in the series, irrespective of what surfaces to play on and you’ve got to keep that in mind too,” said Gambhir in a conversation with Cricinfo.