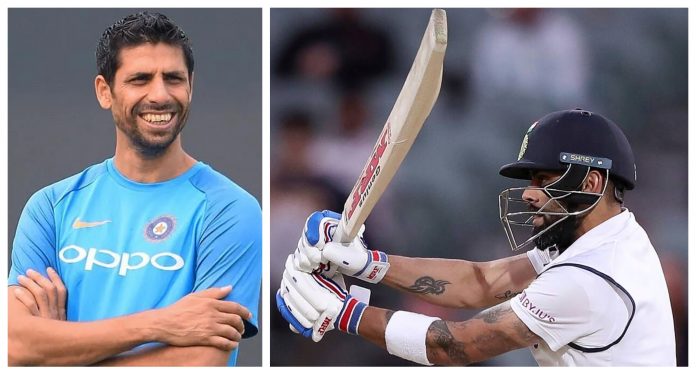 England have started their series against India with a convincing 227-run win in Chennai on Tuesday (February 9). Their win came mostly because of their captain Joe Root, who scored a double century that helped the side post a mammoth 578 in the first innings. However, his Indian counterpart Virat Kohli couldn’t do well with the bat in the first innings. Although he scored a half-century in the second innings, that wasn’t enough to take the team home.

However, former India speedster Ashish Nehra supported the captain, saying that he will also score a double century if he gets the chance to bat first in Indian conditions.

“You are talking about one or two centuries, I would say when India wins the toss, he will score 250 also. This is the special thing about Virat Kohli. When Ashwin got out, he knew that they will lose the match but he did not play any airy-fairy shots,” Nehra said on Star Sports. “He takes pride in scoring his own runs, that he should not get out. Anyone would have got out to the ball he was dismissed, it kept extremely low.”

“He kept at it which you need to do on the fourth and fifth days on a subcontinent pitch. The desire makes this player different from others and it is not only here. When he couldn’t score runs in England, very few people would have seen Virat Kohli lunging forward to play the defensive shots. To do that, you need fitness,” he further added.

Meanwhile, after the huge loss, Virat Kohli said that lack of intensity and poor body language was one of the main reasons for their defeat. Batting first, England have shared a fair share of successes as they posted a huge total of 578 in the first innings, courtesy captain Joe Root’s stunning knock of 218. Dominic Sibley and Ben Stokes have also contributed 87 and 82 runs respectively. In reply, India managed 337.

However, in their second innings, Indian bowlers bowled England out for a below-par score of 178 on the back of the veteran off-spinner Ravichandran Ashwin’s six-wicket haul for 61 runs. Meanwhile, chasing 420, India could manage 192 in 58.1 overs in the second session of the fifth and final day and lost at the end as well.

However, with this loss, their place in the final of the World Test Championship has become uncertain. With New Zealand qualified already, it will be interesting which team will have the last laugh. Meanwhile, both the teams will take on each other in the second Test at the same venue, starting from Saturday.