Russia’s merciless invasion of Ukraine is one of the darkest chapters in history and it has impacted the world of sports in a huge fashion. Thousands of people have lost their lives and the destruction of assets and properties is countless.  Ukraine has been devastated by the bombings and airstrikes launched by Russia. As a result of the war, 10 million people have fled their homes and country, with thousands killed. While the soldiers have been fighting back, Ukrainian athletes were no exception. It has been noted several native athletes have literally taken the matter into their own hands to put up a fight against the war. Apart from athletes, numerous companies have also ramped up their efforts in supporting Ukraine. EXANTE international broker has donated $1 Million to aid families affected by war. 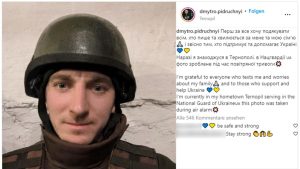 A number of Ukrainian athletes have participated in the ongoing war

Dmytro Pidruchnyi is a world champion in biathlon, which combines skiing and shooting, and a three-time Olympian. He was witnessed competing at the Winter Olympics in Ukraine’s national colors.

But, as it turns out, he started wearing a military uniform and ballistic helmet, seemingly ready for the battle in the war-torn country. Pidruchnyi returned home from Beijing just before Russia launched its invasion of his country.

Pidruychnyi had also made a memorial statement for Yevhen Malyshev, a 19-year-old former athlete on Ukraine’s junior biathlon team. The exact circumstances of Malyshev’s death are unclear, but the International Biathlon Union said Wednesday he “died” while “serving in the Ukrainian military.” 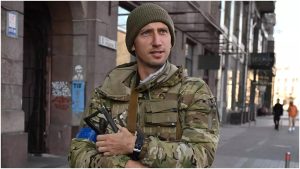 Tennis player Serhiy Stakhovskiy, was on a hiatus from the game after retiring in January following the Australian Open. However, upon the call of duty when Russia invaded, he returned to Ukraine from his home in Hungary and joined up the war.

After nearly spending two decades on the tennis tour, Stakhovskiy told the BBC how “it’s extremely hard on my wife. My kids don’t know that I’m here. He had added, “They don’t understand war. They’re too little to understand what’s going on.”

Amid the list is the former boxing world champion Vasyl Lomachenko, who joined a territorial defense unit. He ended up foregoing a championship fight with George Kambosos Jr. to stay and help his countrymen. He vowed to remain in Ukraine until the war is over. 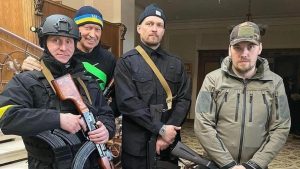 Meanwhile, the world heavyweight champion Oleksandr Usyk was also pictured holding a rifle. Usyk originally hails from Crimea, which Russia annexed in 2014.  He is one of the other star boxers who had joined the Ukrainian forces in February but left the country in order to prepare for his blockbuster rematch with Anthony Joshua.

Usyk recently created a charity to offer relief aid in Ukraine, his home country. The Usyk Foundation is assisting to provide basic needs to the people who have fallen victim to the Russian invasion of Ukraine.

Speaking about non-combat roles, the two other former champions, Vitali and Wladimir Klitschko, have been symbolic in Ukraine’s defense. Vitali is the mayor of Kyiv and Wladimir is a trusted adviser. By the looks of it, the invasion is far from over but everybody is hopeful that the war ceases soon.