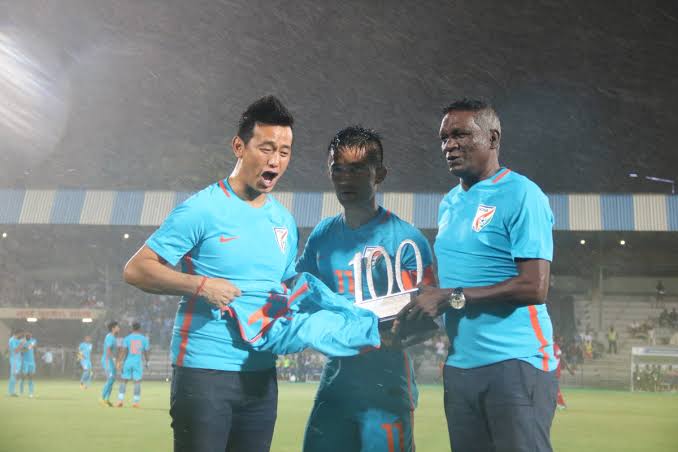 On an Instagram chat alongside current Indian national team maverick Sunil Chhetri, former striker IM Vijayan shared that one of his greatest regrets in life was to have never played with Chhetri.

India had a brilliant attacking trio once, with Tulsidas Balaram in the middle and the recently decased PK Banerjee and Chuni Goswami attacking from the left and right respectively. They were easily one of the best Asian attacking trio at that particular time period, and Vijayan wonders what could have happened if he, Chhetri and Bhaichung Bhutia played together for the national team.

“If I had delayed my retirement by at least one or two years, maybe I could have played alongside you. I was unlucky. That’s one thing that I’m jealous of Bhaichung is that he got to play with you but I never got to play with you. Imagine what you, me and Bhutia could have done while playing together. It would have been great,” Vijayan mentioned to Chhetri.

Chhetri also regretted that he couldn’t play alongside Vijayan in any level of football. Vijayan opined that Chhetri, now 35, could easily play three more years of football.

“You can still easily play three more years for India even while taking so much load on yourself when playing for club and country. Scoring so many goals and doing all this is not easy,” he said.

When Chhetri asked him about advises to younger footballers, Vijayan said: “I was telling Sahal, don’t look anywhere else. Just look at your seniors and the players who are in front of you. Look at Sunil Chhetri and see what he is doing. I told this to Ashique Kuruniyan and everyone. I’m not saying good things because you are interviewing me, I’m just telling what I see.”