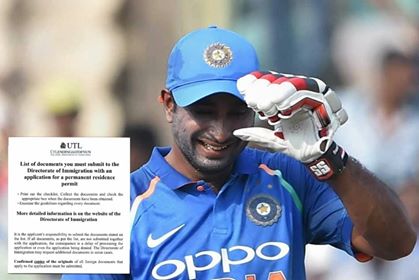 India was on a dream run the World Cup until Sunday when England broke their unbeaten run. However, it was just a one match thing for India. India won their next fixture against Bangladesh and are now only the second team which has qualified for the semi-finals.

The Men in Blue still have another game before the group stages end. If India manages to win that game and Australia face defeat in their last game against South Africa, India will end up at the top of the table, pushing the Aussies to second.

Though as far as the results are concerned, all is going well for India, it is not so in terms of a fit squad. First, Shikhar Dhawan’s fractured thumb forced him out of the World Cup. Then followed Bhuvneshwar Kumar, who walked off due to a hamstring injury in the Pakistan game. However, he has recovered and was back against Bangladesh. The latest addition has been Vijay Shankar, who has been ruled out of the World Cup with an injured toe.

While Rishabh Pant replaced Dhawan, Mayank Agarwal will be in England instead of Vijay Shankar. The catch here is that Mayank Agarwal was far from contention but now finds himself with the squad. Agarwal’s selection came before Rayudu, and that has not gone well with the latter.

Just Ordered a new set of 3d glasses to watch the world cup 😉😋..

When the team was selected in April, Rayudu came up with a sarcastic tweet against the BCCI. This has led to the BCCI turning away from the player. And the disappointment of the batsman was quite clearly seen after Mayank flew to England, as Rayudu announced his retirement from all forms of cricket today.

However, a country not known much for its cricket has extended a special offer for Rayudu. Cricket Iceland in a tweet has offered permanent citizenship and a spot in their team to the batsman.

Agarwal has three professional wickets at 72.33 so at least @RayuduAmbati can put away his 3D glasses now. He will only need normal glasses to read the document we have prepared for him. Come join us Ambati. We love the Rayudu things. #BANvIND #INDvBAN #CWC19 pic.twitter.com/L6XAefKWHw

It was after this tweet went viral, that Rayudu abruptly announced his retirement. Though he has not stated any reason behind his retirement, he did state that he won’t be playing the IPL. But, he will be open to playing other T20 leagues abroad.