Tyson Fury and WBC heavyweight champion put on an entertaining title fight at the Staples Center in Los Angeles, California. Although, many people disagreed with the fight ending in a controversial draw, as judges gave Wilder the nod 115-111 on one card, Fury 114-110 on another and the third scoring the fight 113-113.

The fight was an instant classic and added a lot of flavour to the heavyweight division. It can easily be regarded as the best fight of the division since Anthony Joshua vs. Wladimir Klitschko. This was the biggest heavyweight boxing fight on the American soil since Mike Tyson vs. Lennox Lewis which took place sixteen years ago in 2002 in Memphis. 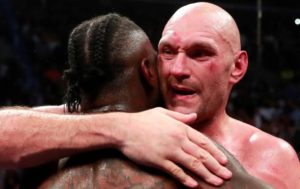 Most people didn’t agree with the result and although most of the Boxing community thought Tyson Fury won. There are still a lot, who think Deontay Wilder won.

American rapper Ice Cube was present at the Staples Center in Los Angeles and he immediately gave an interview to TMZ after the fight and he feels that Deontay Wilder was robbed on the night – that he wouldn’t be lining for a rematch to the “boring” first order of business.

He said: “He knocked down that [EXPLICIT] twice. That was a boring a** fight and it was bullsh*t.

Asked if he wants to see the rematch, he said

Do you agree with Ice Cube?