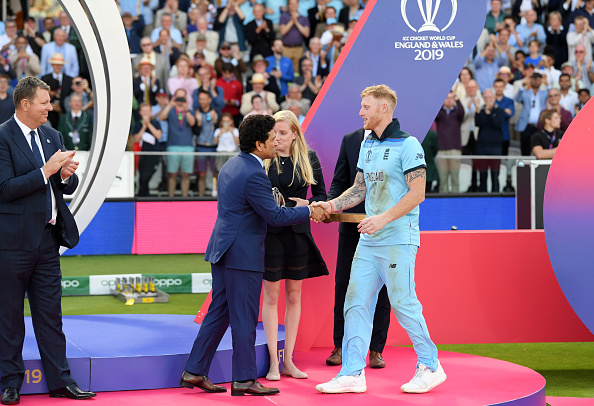 English all-rounder Ben Stokes hit a sensational unbeaten century to guide England to an improbable one-wicket win over Australia by one wicket at Headingley on Sunday in the 3rd Ashes Test. The win meant that England are still alive in the series after Australia won the opening test at Birmingham. The world cup winner scored a heroic unbeaten 84 in the World Cup final in July, and was termed the “greatest cricketer of all time” by the International Cricket Council (ICC) through a social media post. But Indian legend Sachin Tendulkar’s fanbase seemed to be upset with this title.

Just after England were crowned the World Champions for the first time in their history, ICC’s official Twitter handle posted a picture of Stokes with Tendulkar and captioned it, “The greatest cricketer of all time – and Sachin Tendulkar”.  And on Wednesday, ICC re-shared the picture again, this time with the caption, “Told you so”. And just as expected, ICC’s tweet faced criticism from the Indian fans. They claim, Stokes deserves all the accolades for his recent performances, but cannot be labelled as the greatest cricketer ever.

Check out the reactions here:

Greatest cricketer of all time is @sachin_rt , rest everything starts after him in cricket world

Did you get it?

Shall I talk about centuries??

After this post Sachin showing his career Stats to ICC pic.twitter.com/oyg0R7NwuO

You got both the wins for free.. poor umpiring decisions! Yes Ben Stokes played well but if the match wasn't won.. his innings both the time would have been just a good inning. #ridiculous to call him greatest cricketer ..#shame

In the third Test England were bowled out for just 67 in their first innings and needed 73 runs to reach the target of 359 when last man, Jack Leach, who hanged on at the other end firmly before Stokes hit the winning runs finishing on 135 not out. This series saw England level the five-match series at 1-1.