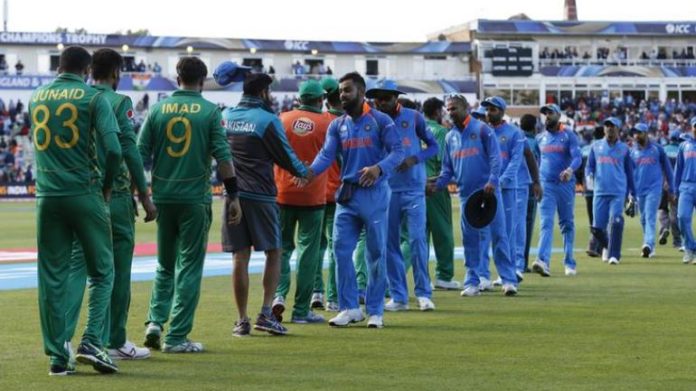 The fixture between India and Pakistan at the upcoming World Cup 2019 in England has dark clouds looming over it as the International Cricket Council (ICC), during its meeting in Dubai later this month, is set to discuss if the two teams should play each other. The match to be held at the Old Trafford ground in Manchester on June 16 is under doubt after a suicide attack killed 40 CRPF soldiers in Pulwama district of Kashmir last week.

The International Cricket Council (ICC) will host their quarterly meeting in Dubai from February 27 to March 2. It is expected that the issue of the India-Pakistan World Cup clash will come up discussion during this meeting.

“There are chances that the India-Pakistan World Cup clash will be discussed on the sidelines of ICC meeting to be held in Dubai from February 27,” ICC sources told ANI on Wednesday.

The Pakistan Cricket Board (PCB) are expected to speak to the Board of Control for Cricket in India (BCCI) counterparts during the course of the ICC meeting.

India and Pakistan have not played a bilateral series since 2013 but they have faced each other in ICC tournaments like the 2017 Champions Trophy and 2018 Asia Cup, both at neutral venues.

The BCCI are adopting a ‘wait-and-watch’ approach. “It’s too early to say about a World Cup match. If the Indian Government passes an order, the BCCI will abide by it. However, we haven’t made any request to ICC on this yet,” a BCCI official told CricketNext.

The Committee of Administrators (CoA) and the BCCI are expected to wait till the end of the India-Australia series to take a call on the issue. A meeting is expected to be held during the fifth ODI scheduled at the Ferozeshah Kotla in New Delhi on February to discuss the issue.

“The result of a boycott would be that Pakistan will get the points of the match & if it is final (b/w India & Pakistan), they will win the World Cup without even playing,” a BCCI official told ANI.