India’s one and only warm up match of the tournament did not go as per plan as they surrendered to a defeat against New Zealand.

Team India kicked off their World Cup preparations with a loss to New Zealand. The side failed to handle the green wicket early on and bundled out for just 179, failing to last the complete 50 overs.

Despite knowing that overcast conditions and a green wicket were in place, skipper Virat won the toss and elected to bat first. Vijay Shankar and Kedar Jadhav were left out of the game due to injury concerns.

India in no time became 24-3 as Trent Boult made full use of the conditions to castle the top order that consisted of Rohit, Dhawan and Rahul. Skipper Kohli hung in for some time but couldn’t tackle the moving ball and finally fell to de Grandhomme in the 11th over for 18.

Dhoni and Hardik Pandya began the revival task but the duo lasted only for another 9 overs before Neesham came to join the party. Neesham removed both Pandya and Karthik in the same over to leave the side reeling at 81-6.

After the first innings it was clear that the pitch had flattened a bit and it was always going to be a tough task to defend such a low total. Bumrah began brightly removing Munro in his very first over.

Unlike India who lost quick wickets, NZ kept the scoreboard moving without taking much risks. Once Guptill fell to Pandya in the 10th over, Williamson and Taylor joined hands to take the game away from the opposition.

The duo added 114 runs for the 3rd wicket where each of them notched up their respective half centuries. Williamson and Taylor eventually gave away their wickets for 67 and 71 respectively but the damage had already been done. Tom Blundell watched from the other end as Henry Nicholls finished the game to kick off NZ’s world cup preparations in a bright fashion. 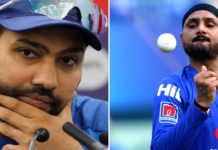 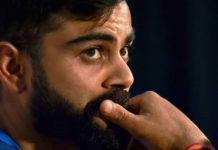 Imran Tahir says MS Dhoni is a great leader and a...