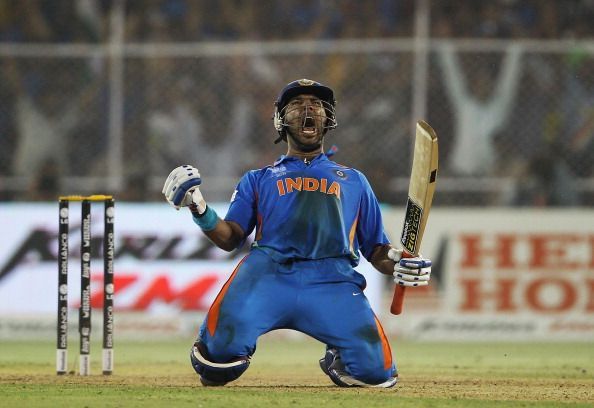 Yuvraj Singh, who was the man of the tournament in the ICC Cricket World Cup 2011 spoke about his favourites going into the tournament. His success was instrumental in India lifting the World Cup trophy for the second time as he fired both with the bat and the ball with a tally of 362 runs and 15 wickets to his name.

Talking about the upcoming World Cup, Yuvraj in an interview spoke about how the new rule of five fielders has impacted the game. A few years back when scores in the range of 270s and 280s were touted to be competitive ones, these days anything under 300 is below par because of the field restrictions. However, he still feels India has the firepower to chase down any target set by the opposition.

Singh also stressed on the importance of Virat Kohli and Rohit Sharma in the Indian side, and it is imperative for either of the two to have a good tournament in order to escalate India’s chances of going forward into the tournament. Hardik Pandya’s sensational form in the IPL is also a huge plus as he can play the role of a finisher in the side.

The Southpaw also credited IPL for providing much-needed practice to all the World Cup-bound players and feels the experience of playing a tournament just before the marquee event will prove to be beneficiary for the team.