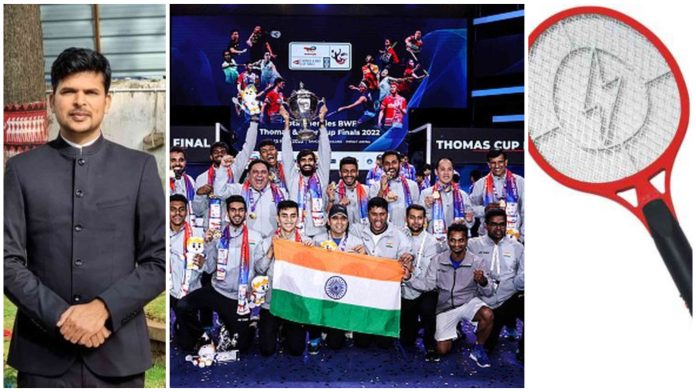 An Indian Administrative Service officer named Somesh Upadhyay has been heavily reprimanded by the Indian netizens on Twitter, including veteran cricketer Amit Mishra, for crediting India’s recent victory at the Thomas Cup to mosquito racquet.

The Indian badminton team etched their names in history by defeating 14-time champions Indonesia in the final of the 2022 BWF Thomas Cup and winning their maiden title. Lakshya Sen and Kidambi Srikanth won their respective singles matches, while the duo of Chirag Shetty and Satwiksairaj Rankireddy clinched victory in their doubles outing.

With the wave of celebration among the sports fans of India, one tweet from an IAS officer Somesh Upadhyay on India’s triumph grabbed everyone’s attention. Upadhyay tweeted that the reason India was able to defeat the Indonesians was due to mosquito racquets, an item that is quite common in Indian households.

“Indonesian are surprised how Indians got better at badminton than them,” tweeted Upadhyay, along with a photo of a mosquito racquet.

Indonesian are surprised how Indians got better at badminton than them. pic.twitter.com/rW01DMXyjN

The tweet caused an uproar among the netizens, who slammed the IAS officer for the remark, especially Amit Mishra, the veteran Indian cricketer who tagged the tweet as “distasteful” and an insult to the shuttling heroes of the country.

This is not only distasteful but also insulting the achievement of our badminton heroes. https://t.co/QFWWKKw55t

Several other tweets flowed in, reprimanding Upadhyay for his remark.

I just don’t understand how comfortably he is undermining the efforts and hardwork of winning such a prestigious world event! And he is a literate and a high class official! Still he feels no shame in bringing the glory of his own country and its heroes down! https://t.co/rlb4WrPPxL

Now some defending will come, saying it's just a joke, few days back when an IAS won medal, then why there were no jokes?
Why everyone from the fraternity was tweeting with garlands? https://t.co/3Lehz3GtFc

UPSC should raise its standards. If the motivational tweets by IAS officers which often glorify poverty and provide new content for memers weren't enough, this is the new low. https://t.co/HgIlBZzlNZ

Got the pun ! Laughable
But should've thought of the occassion while tweeting. An apt example of why we need civil service reforms in our country. How can the society be of any good when the people administering us are equally senseless.🙂 https://t.co/An9V2vZHmO

And he has not cared to issue any apology yet. @RijijuOffice @ianuragthakur our players have given their sweat and blood and someone from administration is making a tweet like this on them. Audacious enough, even after many showing disappointment not a single apology from him. https://t.co/waRhGWxSMW

Indian's also surprised that how you became an IAS. https://t.co/tcgImKrkCR