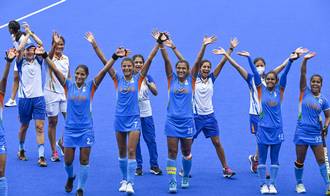 The Indian Women’s hockey team had showed great promise at the 2020 Tokyo Olympics after finishing fourth. The girls are ready to take on China, Korea, Japan, Thailand and Malaysia at the Asian Champions Trophy. The event is going to take place at Donghae from December 5. The very first match will be against Thailand which will take place on December 5th. Next, the girls will be tackling Malaysia and then Korea on December 8th. The team will be up against China and Japan on 9th and 11th December, respectively. The final match will be held on December 12th.

The team is pretty excited about the upcoming match. The girls cannot contain their excitement. They understand that the nation is watching them and they have huge responsibility on them. The team is currently being led by Savita, since Rani is missing from action. Rani is still undergoing rehab in Bengaluru.

“Definitely the whole team is excited. This is our first tournament after the Olympics and we have a responsibility to do well at the tournament.”

New players to look forward to at the Asian Champions Trophy

Many new players will be debuting in the event and new champions may be born. Fans of hockey have a lot to look forward to in December. The debutantes will be playing in the international field for the first time and Savita thinks that this exposure will be good for them.

“We have quite a few youngsters who are part of the team and will be making their International debut, they are also looking forward to this exposure.”

Although team india is the highest ranked team participating in the competition, currently ranked world 9, Korea is a formidable opponent. The Korean women’s hockey team gave the Indian girls a run for their money in the last match. The Indian women’s hockey team could not best Korea in the finals. The Korean team will not make it easy for indian girls this time, either.

“A team like Korea is difficult to beat at home and last edition too we lost to them closely in the Final and this time too I expect them to challenge us.”