India lost 1-3 to Australia in a shootout in the summit clash of Champions Trophy hockey in Breda, the Netherlands. It was a highly competitive battle between the two finalists of last edition but once again Australia came out on top in the shoot-out to clinch their 15th Champions Trophy title. Australia took the lead in the 24th minute through a penalty corner by Blake Govers, but India hit an equalizer in the 42nd minute through a field strike by Vivek Sagar Prasad. 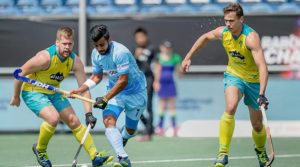 Three minutes from the final hooter, Manpreet failed to get his stick to Sunil’s pass from close range as the match went into shoot-off, where Australia came out stronger.

The Australian Goalkeeper produced a brilliant show in the shoot-off, denying Sardar Singh, Harmanpreet Singh and Lalit Upadhayay while Manpreet Singh was the only scorer for India.

Australia, on the other hand, converted their first two efforts in the shoot-off through Aran Zalewski and Daniel Beale before Indian goalkeeper PR Sreejesh denied Matthew Swann and Tom Craig.