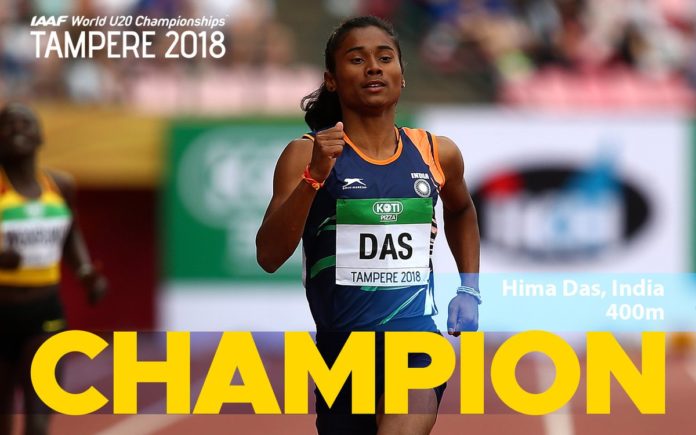 Hima Das scripted history by becoming the first ever Indian athlete to have won Gold in the 400m final at the IAAF World U-20 Athletics Championship. The 18-year-old Das from Assam, a pre-tournament favorite, clocked 51.46s to win the gold. Andrea Miklos of Romania came second with a timing of 52.07  to claim Silver while Taylor Manson of USA settled for Bronze after clocking 52.28 seconds. 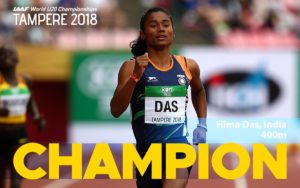 Hima Das also took the fifth spot in the 200m at the Youth Worlds in Nairobi. And she was sixth in the Commonwealth Games in Gold Coast in April.

As soon as she won the Gold Medal, congratulation tweets started pouring in for the 18-Year old on Social Media.

Congratulations to India's sprint champion, #HimaDas on creating history by becoming the first Indian woman to win a GOLD 🏅 in 400m at the IAAF World Under-20 Athletics Championships.
India is proud of you! pic.twitter.com/ptDfEwJLhD

Congratulations to the sprinting sensation #HimaDas for an incredible performance. Winning the first ever track gold in a world championship, she has made India proud and given us another reason to keep our heads held high. #IAAFTampere2018 pic.twitter.com/yPuCx97StX

The biggest positive to come out of what Hima Das has achieved isn't the medal, it's the hope that India can. Take a bow, champion!

It’s amazing that it coincides with the 5 year anniversary of Bhaag Milkha Bhaag & Milkha-ji’s biggest dream was to witness an Indian athlete win Gold in track & field. 😊👏🏽👏🏽👏🏽

India is delighted and proud of athlete Hima Das, who won a historic Gold in the 400m of World U20 Championships. Congratulations to her! This accomplishment will certainly inspire young athletes in the coming years.

Hima Das now joins the illustrious company of star javelin thrower Neeraj Chopra, who won a gold in Poland in the last edition in 2016 in a world record effort.