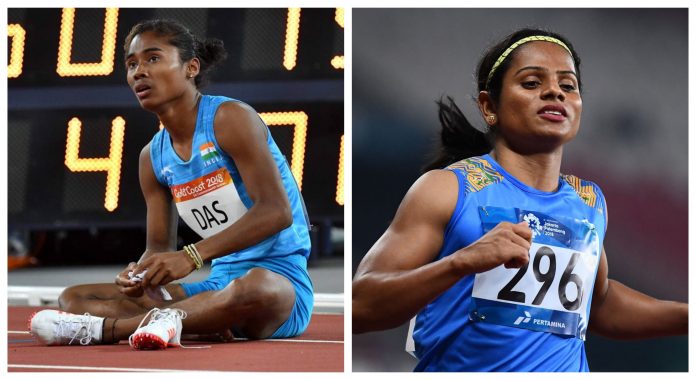 The recent surge in COVID-19 cases in India has resulted in the suspension of multiple international flights to and from the country and for the Olympic hopefuls, this could become a massive blow to their participation in the international qualifiers.

Indian sprinting icons Hima Das and Dutee Chand, along with the women’s 4x100m and the men’s 4x400m relay teams were slated to take part in the upcoming Olympic qualifying World Athletics Relays in Chorzow, Silesia in Poland on 1st and 2nd May as their connecting flight to Amsterdam has been cancelled.

As there are no direct flights from India to Poland, the Indian contingent was scheduled to catch a KLM flight to the Dutch capital on Thursday, but unfortunately due to the Netherlands government decision to suspend all Indian flights from Monday onwards, there is massive uncertainty about the Indian relay teams partaking in the qualifiers.

Amidst the woes, The Athletics Federation of India (AFI) recently revealed to PTI that they are looking for alternate options to Amsterdam to reach Silesia, where the World Athletics Relays are going to be held.

There is a serious doubt that our team may not be able to take part in the World Relays. Many European countries have suspended flights from India. So, we may be stuck and there is a high possibility that the team may not go for the event,” revealed a top AFI official.

“But still we are trying, talking to the government and to our embassies if they can help our athletes to fly into any European city like Frankfurt from where they can proceed to Poland. We are also trying for any connecting flight to Dubai or any other West Asian city,” the official further added.

S Dhanalakshmi, Archana Suseendran, Himashree Roy and AT Daneshwari have been named alongside Das and Chand in the 4x100m relay team. On the other hand, the women’s 4x400m pulled out of the qualifiers beforehand due to two of the members being unfit.

The mixed 4x400m relay team, however, already booked their Tokyo Olympics berth back in 2019 when they made it to the final stage of the World Championships held in Doha.