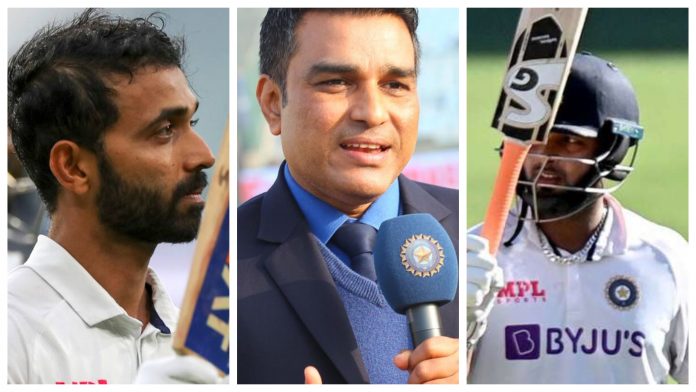 Team India have started the second Test on a positive note where they managed to put up more than 300 runs in the first innings. And, apart from Rohit Sharma’s century and Ajinkya Rahane’s fifty, it was Rishabh Pant, who scored a half-century and took the team to 329 runs as well. Seeing this, former India player Sanjay Manjrekar has suggested that Pant should bat at No. 5, instead of Rahane, who should bat at No. 6.

Ajinkya Rahane bats at No. 5 for India in Tests as Cheteshwar Pujara, the captain Virat Kohli and he plays in the middle order, whereas Pant always plays at six in the Test cricket for India. However, Pant has tasted a fair share of success in recent times against Australia.

“How about Rishabh Pant at five? Just to ensure that you get a left-hand batsman because you’ve got Number 3 a right hander, you’ve got Virat Kohli at 4, Ajinkya Rahane at 5. With Rishabh Pant, now running out of partners and with the kind of form he is in, how about him at five and Ajinkya Rahane at six? Very premature. Wouldn’t happen soon but just a thought that came to my mind,” Manjrekar said to ESPNCricinfo.

Rishabh Pant scored 97 against Australia in Sydney, he again smashed an unbeaten 89* at the Gabba and helped India’s three-wicket win in Brisbane as well. In the first Test against England in Chennai, Pant scored 91 as well. However, Manjrekar also admitted that Rishabh Pant has his own style.

“What I like about him when he defends against spinners, he goes right back into the batting crease and plays with a dead ball. And the same guy can go down the pitch and hit the ball out of the ground. So he can be a nightmare for spinners. Today he took on the off-spinners as well so he’s not a one-trick pony who will only go after the left-arm spinners,” he concluded.