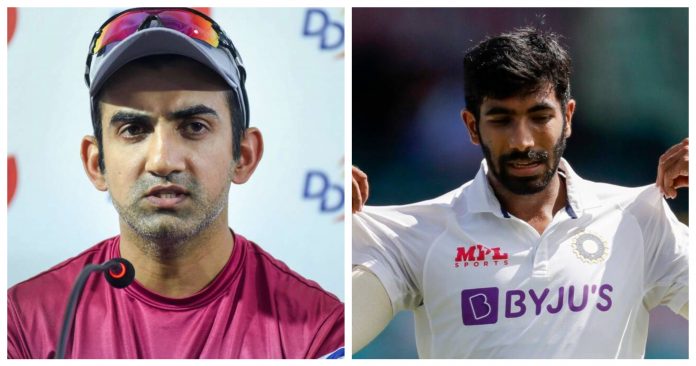 England players have produced a stunning show so far in the first Test against India in Chennai. They have punished all the bowlers and put up a mammoth total of 578 runs in the first innings of the Test. To dismiss the players, every bowler had to work hard on the flat track as well for 190 overs. There Jasprit Bumrah and R Ashwin both claimed three wickets each.

Bumrah has bowled 36 overs and gave away just 84 runs and picked up three important wickets too. And former India cricketer Gautam Gambhir has said that Bumrah shouldn’t play in the next one and should be kept for the all important pink ball Test that will begin on February 24.

“I’m not even sure whether Bumrah should be picked for the second Test match. I think India should preserve him for the pink-ball Test match. See, Jasprit Bumrah is a X-Factor in the series, irrespective of what surfaces to play on and you’ve got to keep that in mind too,” said Gambhir in a conversation with Cricinfo.

Gambhir again said that Jasprit Bumrah should not be used for long spells and he should bowl for only three-four overs as well.

“Jasprit Bumrah – you can’t just keep bowling for longer sessions. Give him that short burst of three overs to try and pick a quick wicket, but not long spells because Bumrah is going to be very important going forward in the series. And if something happens to him, India is going to be in serious trouble,” Gambhir concluded.

Meanwhile, the Board of Control for Cricket in India (BCCI) has recently announced Team India’s schedule for the next two years, and it is going to be hectic for the team as Virat Kohli-led Team India will be playing constantly for nearly the next 15 months until the 2022 World Cup in Australia.

On the other hand, the 14th edition of Indian Premier League (IPL) is all set to take place in its original window. And, the mini-auction is going to take place soon. However, 1097 players (814 Indian and 283 overseas players) have already signed to be featured in the Player Auction of IPL 2021, which will take place in Chennai on 18th February 2021.