The England team have essentially won the third test by completely dominating the Indians on Day 1. However, England’s outstanding display didn’t stop their supporters to once again display poor sportsmanship. On Day 1, India’s new pace sensation Mohammed Siraj had balls thrown at him while fielding at the boundary line.

The England spectators have a history of misbehaving with players. In the last test, they were throwing a few champagne bottle corks at KL Rahul, who was fielding at the boundary line. Not so long ago in the 2019 Ashes, they targeted Steve Smith and David Warner for their involvement in the sandpaper incident in 2018.

Rishabh Pant reveals the incident as it happened

India’s wicketkeeper-batsman Rishabh Pant told the media exactly what happened. The spectators were throwing a ball at Siraj while he was fielding. The TV cameras showed an angry Kohli asking Siraj stationed at the boundary to throw the object out.

“I think somebody (from the crowd) threw a ball at Siraj, so he (Kohli) was upset. You can say whatever you want, chant, but don’t throw things at fielders. It is not good for cricket, I guess,” Pant said at the end of the first day’s play. 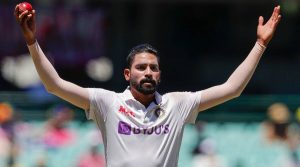 This isn’t the first time that fans in the stadium have targeted Mohammed Siraj. He was previously racially abused in Australia during the SCG Test. The Australian crowd at the SCG abused him and called names which led to the eviction of a few spectators, leading to the stoppage of play. In fact, it was Siraj, who had back then complained to the umpires that he was abused by a section of Australian supporters.

Amidst all the chaos, England have managed to have a stronghold over the visitors. They bowled out India for 78 and are currently on 120 for no loss. The Indian team will require another Lord’s type miracle to come back in the test match and avoid an innings defeat.

ALSO READ: Virat Kohli given a musical send off by Barmy Army at Headingley