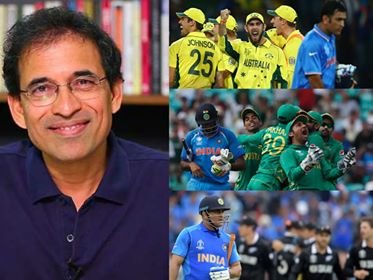 India failed to reach the finals of the 2019 Cricket World Cup, today. It was the New Zealand team which got the better of the Men in Blue in an intense encounter in Manchester. After the game being washed out yesterday, it took off from where it was left today. New Zealand managed to reach 239 runs in their 50 overs. However, India was bundled up for just 221, losing the game by 11 runs. Harsha Bhogle, on his twitter, was quick to point out a series of high-pressure games that India has lost.

It all started in 2015 when India lost to Australia in the semi-finals of the World Cup. Then came 2017, where India lost the finals of the Champions Trophy against arch-rivals Pakistan. And this is the third high-pressure game that India has lost.

This is a worrying stat for the Indian cricket team. This game, however, saw lots of ups and downs. India started their innings in probably the worst possible fashion. At the end of the first powerplay, India’s score was 24 runs for the loss of 4 wickets. Three of these were the top 3 batsmen of India.

Jadeja’s wicket came at the last ball of the 48th over. But Dhoni was still on the field and the game was completely on Dhoni’s shoulders now. However, a throw from Guptill onto the stumps and it was game over. Dhoni was run-out and New Zealand had one seat booked in the finals of the World Cup at Lord’s, London, on the 14th of July.

Sourav Ganguly the cricketer comes out as he tweets about India’s...