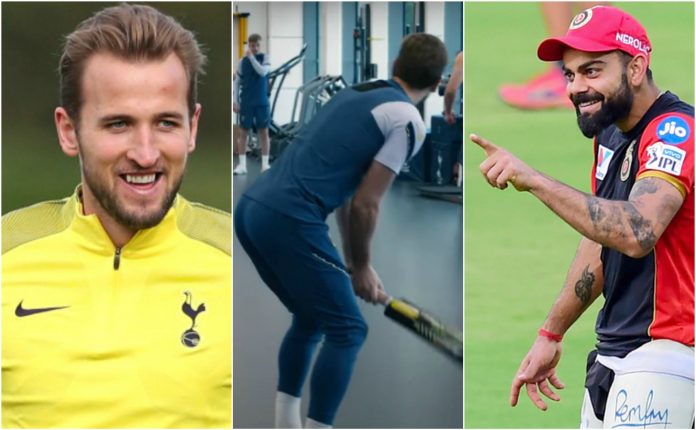 Premier league table-toppers Tottenham Hotspur have come in the limelight when they shared a video recently. The official Twitter handle of the English club posted a video clip where Joe Hart can be seen bowling fast left arm and Harry Kane knocking off the short balls as well. While Gareth Bale was in the slips, fielding and the team got some practice with cricket.

While the video took no time to be a sensation on social media, everyone was in awe after seeing that.

Meanwhile, Harry Kane took that opportunity and posted a tweet on Twitter where he shared his desire to play in the Indian Premier League (IPL) team that too for Virat Kohli led Royal Challengers Bangalore. Kane tweeted: “Got a match winning T20 knock in me I reckon. Any places going for @RCBTweets in the @IPL next season @imVkohli ??”

Got a match winning T20 knock in me I reckon. 😂🏏 Any places going for @RCBTweets in the @IPL next season @imVkohli?? pic.twitter.com/tjUZnedVvI

The captain, Virat Kohli, too responded with a positive note. He tweeted, Haha good skills mate. Maybe we can get you in as a counter attacking batsman @HKane.”

Haha good skills mate. Maybe we can get you in as a counter attacking batsman😃👏 @HKane https://t.co/rYjmVUkdwO

Meanwhile, another famous player Stuart Broad joined hands. He revealed that Kane played the short ball better than Stuart who has been trying to do it right for 13 years now. However, his response came when Kevin O’Brien tweeted that Kane was playing the short ball more beautifully than him while facing Broad’s deliveries. The cricketer tweeted: “H. Kane played that short ball better than I played yours at Lords!!!”

While Stuart Broad also said that the cricketing like rivalry can be seen in between Hart and Kane too, Kevin Pietersen was pretty impressed with the left-arm seamer in Joe Hart.

While everyone was sharing their views, how can England all-rounder Ben Stokes be silent? He also joined the bandwagon and was seen quite impressed by the footballers’ skills as well. He went a step further and gave an invitation to meet in the nets in the upcoming summer. He wrote: “Love this lads. Fancy a net next summer?”

Fancy a net next summer? https://t.co/ZOI59oDYhT