The Pro Panja League is back after a year to host its second event in Mumbai. The event will take place in the posh section of South Bombay named Colaba in a venue called the Radio Club Pier.

It sits parallel to the Iconic Taj Hotel and the Gateway of India. This time around, Pro Panja League will feature 18 athletes with most being the medalists from the first Pro Panja League ranking tournament.

One of the most anticipated match-ups in this event is the 90kg Arm Wrestling match between the silver medalist of the 2020 Pro Panja League ranking tournament Harman Mann and the newcomer and multiple time national medalist Sameet VT. 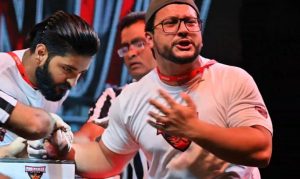 Hailing from Nawanshahr, Harman gave Arm Wrestling fans in a viral moment during his prelims bout in Pro Panja League ranking tournament. In this bout, Pratham Bagga had Harman’s right hand almost pinned, but the Nawanshahr native bounced back and pinned his rival and then later burst into emotions. It was without a doubt one of the most iconic moments of the inaugural season of Pro Panja League.

Sports India Show team had the opportunity to chat with Harmann to talk about his preparations heading into the upcoming tournament.

1.) How is your training been ahead of the match?

My training has been going great and I am in a great place mentally and physically heading into this match.

2.) What are the different types of workout that you’re heading into this fight?

3.)Are you maintaining any specific type of diet for this fight?

I am not on any special diet, I am on a typical desi diet which is filled with desi ghee. I have also been consuming only vegetarian diet for the past two months.