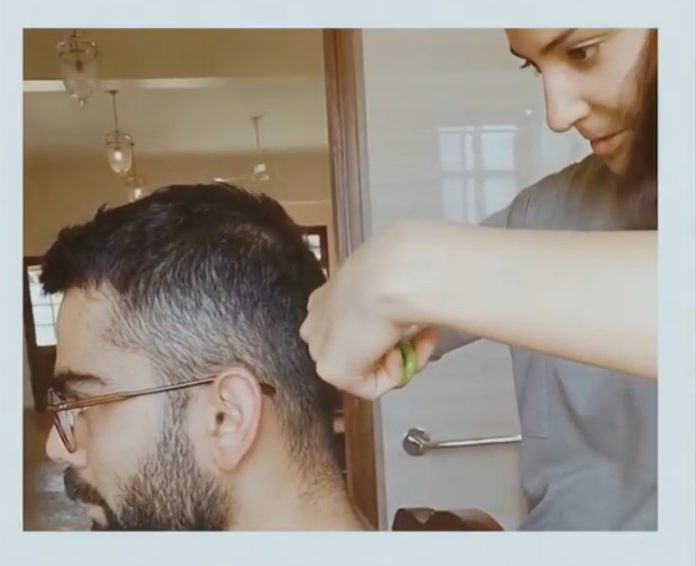 It seems like Virat Kohli and his wife Anushka Sharma are relishing their self isolation period during the nationwide lockdown. On Saturday, the actor shared a video on her social media account – where she can be seen giving the Indian skipper a haircut. The versatile Bollywood star appears to enjoy her new skill set – captioning the video as “Meanwhile in quarantine”!

“This is what quarantine does to you,” Kohli joked “You allow things like this to happen. Getting your hair cut with kitchen scissors,” while Anushka gives him a new hairstyle.

Check out the funny incident here:

A closeted hair stylist Anushka was clearly having fun with her new role and even at one point, she gave her husband a proper view of his new hair-do. The two then discuss the new haircut, before Kohli concludes the video by saying “Beautiful haircut by my wife.”

Earlier this week the power couple issued an important message to their fans through a Twitter video. The duo pleaded everyone to “stand united” and follow the regulations implemented by Prime Minister Narendra Modi last Tuesday.

“These are testing times and we need to wake up to the seriousness of this situation. Please let us all follow what’s been told to us and stand united, please. It’s a plea to everyone,” Kohli wrote as the caption to the 51-second-long video on Twitter.

These are testing times and we need to wake up to the seriousness of this situation. Please let us all follow what's been told to us and stand united please. It's a plea to everyone 🙏🙏🙏 pic.twitter.com/75dDlzT6tX

Like most countries around the world, India too continue their battle against the ongoing Coronavirus pandemic. On Tuesday, Prime Minister Narendra Modi announced a three-week national lockdown as an essential step to contain the disease.

With mass gatherings banned, most of the sporting events all around the globe has either been postponed or cancelled ; as more than 6,00,000 people are afflicted with the illness so far.

Team India were scheduled to host South Africa in a three-match ODI series this month; but had to postpone the last two matches, after the first game was washed out at Dharamshala.

The 13th edition of the Indian Premier League was postponed until April 15 amid the COVID-19 scare, but with the announcement of the nationwide lockdown, the cancellation of the tournament looks inevitable.

Indian athletes who are policing the streets during Covid-19 lockdown!