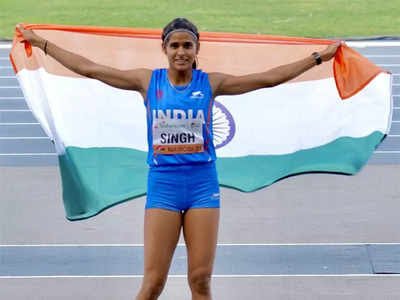 Born in Jhansi, Shaili Singh won the silver medal at the World Athletics Championships. The long jumper recorded 6.59m at the event which is her personal best but despite her best efforts it was not enough to grab first place.

It was European athlete Maja Askag who snatched away the gold medal after recording a jump of 6.60m.

The mere 1cm turned the tables and Shaili was left feeling distraught after the loss. The 17-year-old was visibly sad after losing out to the Swedish athlete.

This was the first time the youngster had not won the title, and as her coach, Anju Bobby George said the teenager hates losing and hates silver.

She is determined to win gold in the upcoming games.

“I am just 17, I want a gold in the next U20 World Championships (in Cali, Colombia). There are also Asian Games and Commonwealth Games next year and I want to do well in those events.”

Shaili had wanted to win for her mother. Her mother had told her to win a medal for the country.

“I could have jumped farther than 6.59m and won the gold. My mother had told me about winning gold and the national anthem being sung in the stadium (but I could not do it).”

Shaili had scored 6.34m in the first round. Her start was impressive; by the third round she had jumped to 6.60m but it was in the fourth round when she faltered. She had a bit of a technical issue and she could not land past 6.60m.

Her coach Bobby George said, “There was a bit of a technical issue while landing, otherwise she could have cleared 6.65m or even 6.70m.”

Hailed as the next superstar in athletics after Neeraj Chopra, the 17-year-old qualified for the event with a jump of 6.40.

The current world U-18 world no 2 was raised by a single mother. While her mother worked as a tailor, Shaili trained under Anju Bobby George. She has previously won the women’s long jump at the National (Senior) Inter-State Championships.

With Shaili’s win, India has won a total of 2 silvers and 1 bronze at the event so far.