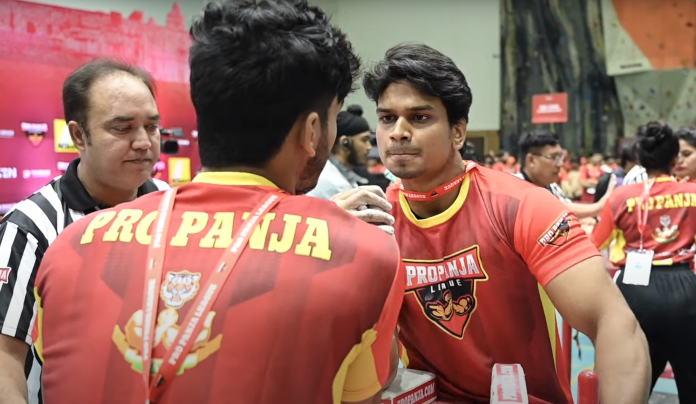 Akash Kumar is a very well known Arm Wrestler in India and having won multiple national titles, he is also one of the most elite Arm Wrestlers in India. He was recently seen competing at the 2022 Pro Panja League ranking tournament which took place in Gwalior. He came in at 3rd position in the 70kg weight category.

Prior to that, he won the gold medal in the 70 kg category at the 2022 Sheru Classic Arm-Wrestling Championship which took place in New Delhi. He also won the ‘Champion of Champions in the same tournament.

Akash Kumar‘s journey in Arm Wrestling has been nothing sort of amazing. Sports India Show had the opportunity to chat with Akash Kumar to learn about his journey in the sport and also making the transition from gymnastics.

When did you start Arm Wrestling?

“I started in December 2014 when I won my first State Championship. To be precise, it was in 2015 that I started when I gained more knowledge about Arm Wrestling.”

You were very popular around that time on YouTube when you started posting videos of Arm Wrestling. How did you start with that?

“Actually back in the day, Arm Wrestling was not much prevalent on Youtube and it was not popular among the people. So, I had a channel but hadn’t posted any video of Arm Wrestling. I noticed that people were not fond of posting videos of Arm Wrestling. But prior to that, I had a passion for making videos irrespective of the sport. I also used to shoot videos when I was into gymnastics. It was like my habit to make videos. I started shooting the videos on my mobile phone and gradually I started uploading them on YouTube. I didn’t know it would turn out to be so massive. I had started just to showcase my Arm Wrestling skills.”

You became so popular on YouTube that foreign Arm Wrestlers including Devon Larratt started to recognize and talk about you. He even posted a comment on an Instagram post of the match between you and Rahul Panicker. How do you feel about it?

“I feel pretty good. You aspire to be an arm wrestler and make someone an idol. So, when your idol praises you it is a very unique feeling.”

How many Arm Wrestling tournaments have you participated in?

Pro Panja League started in 2020. However, you didn’t participate in that. What was your idea when you first heard about the idea?

“During that time, I was in a different competition. I was not aware of Pro Panja League but when I watched videos of it on social media, I got the idea that they are providing a good platform for aspiring arm wrestlers. I observed the matches, the videography and other elements which are noticeable. I got the idea that they were unique from the other arm wrestling promotions. Gradually I realized that I should get involved in the competition.”

How do you feel about participating in the Gwalior event?

“I can say that it’s probably the best event I have ever participated in. Keeping the prize money aside, I think it was the best platform from all the competitions I’ve participated in. I felt it was a massive platform. I also enjoyed what happened with the Gwalior Fort. It was outstanding.”

After IPL and ISL, finally, a league is starting with Arm Wrestling by Pro Panja League next year. How do you feel about it?

“I’m super excited. Not only me but all the arm wrestlers in India. It is something which the people never imagined would take place in India. Also, I have wanted this league to reach success because I want people to be aware of this sport. People hardly recognize arm wrestling in India. I believe if this sport becomes popular among them then they will stop doubting.”