Smriti Mandhana and Jemimah Rodrigues are the two best cricketers in recent time. Having played for India, both have become quite good friends both on and off the field as well. Fans get to see their friendly banter often on social media as well.

Recently, Mandhana shared a picture of herself on Instagram. While it became viral in no time, it was Jemimah’s comment on that which took the limelight away from others. She commented on a cheeky note, “But what if it’s a good day to have a Marie Gold? 🤔” Fans liked her funny comment too. 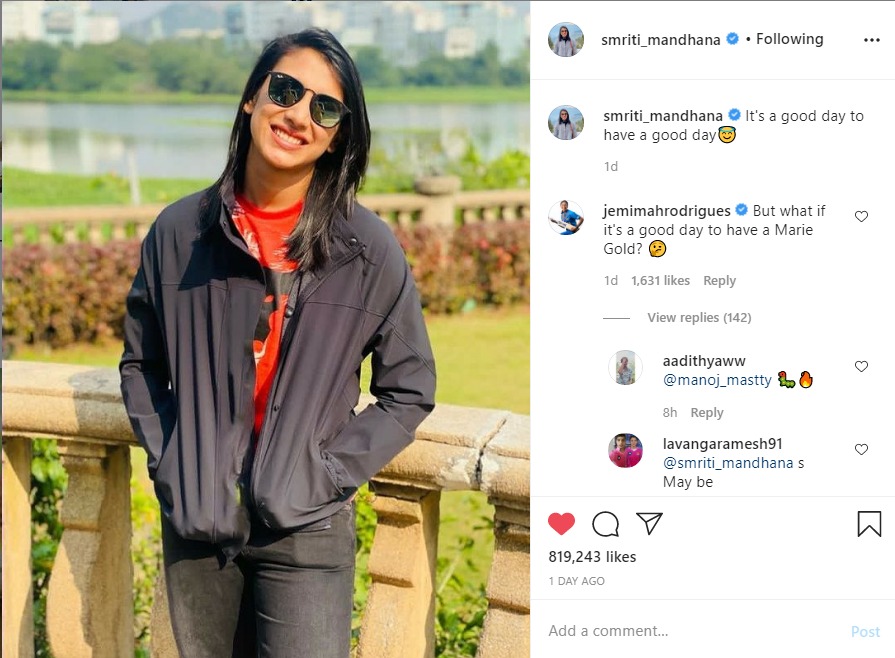 They both recently featured in the Women’s T20 Challenge. While Smriti Mandhana led the Trailblazers, Jemimah was part of the Supernovas, led by Harmanpreet Kaur. In the final, Trailblazers successfully restricted Supernovas within a below-par while defending a total of 118 on the back of a brilliant bowling show and beat the two-time champions Supernovas by 16 runs and win their maiden Women’s T20 Challenge trophy as well.

The game was a low-scoring clash owing to a slow surface and only Trailblazers captain Smriti Mandhana (68 off 49) could manage to score a fifty. Apart from her, both the side struggled to open their arms. Jemimah too failed to leave her mark in the tournament.

Meanwhile, Mandhana’s fan following and popularity are known to all, which earned her several associations with the brands as well. Equitas Small Finance Bank appointed India’s swashbuckling opener as the brand ambassador where she will be featured in promoting their new product that aimed at women named Eva. ‘Eva’ is a savings account which tries to look after the well-being of Indian women including Health, Wealth and Prosperity.

While speaking about this, Smriti Mandhana said, “I am really glad to be an instrumental part of Equitas Small Finance Bank’s motive of promoting financial empowerment to all sections of society. It is a great privilege to be associated with the brand’s positioning as a socially responsible bank.”

“Their special efforts in encouraging women to save & become self-reliant is something that intrigued my deep interest. Looking forward to create a ripple effect with Equitas in stressing the importance of Growth & Prosperity,” Smriti Mandhana further added.