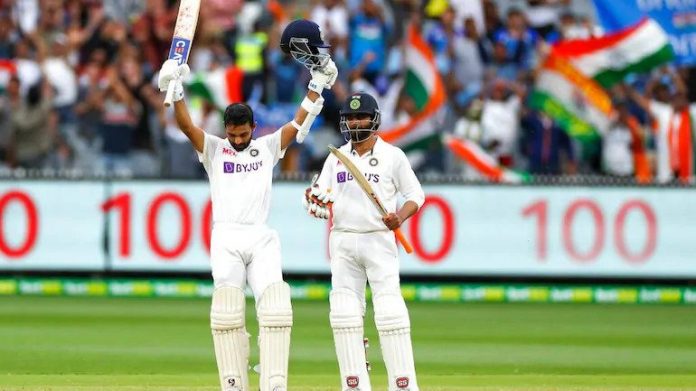 Ajinkya Rahane has been showered with praise ever since the start of the Boxing Day Test. While being lauded for his captaincy on Day 1 which saw India bowl out the Aussies for just 195, the spotlight soon hovered over to his vigilant hundred. The stand-in skipper has now received the highest praise from the legendary Sunil Gavaskar.

The Indian innings looked to crack with the quick dismissals of debutant Shubman Gill and Cheteshwar Pujara. However, Rahane held the entire batting unit with an innings that lasted around 77 overs.

Speaking ahead of the crucial Day 3 of the test, Gavaskar cited the gritty innings as one of the most important innings in Indian cricket history. The former batsman believed that the innings was nothing short of an exemplary statement following the batting howler in Adelaide.

“I believe that this hundred is going to be one of the most important hundreds in the history of Indian cricket,” Gavaskar told the Seven Network before play resumed on day three.

“Important because it’s showing character, sending a message to the opposition that after being dismissed for 36 in the previous game, to come back in this manner, this Indian team is not going to just lie down and be walked all over” he added

Rahane played a near-perfect innings against a world-class bowling attack on a strip that was not batting friendly. While the Aussies dropped a couple of catches, nothing should be taken away from the 32-year-old, who looks to lead India towards a series-levelling win.

The middle-order batsman could not convert his hundred into a big score as he fell early on Day 3. Rahane was run out after attempting to complete a risky single. Labuschagne’s perfect throw to Paine’s gloves proved too much for the centurion, who departed for 114.

Rahane has been RUN OUT!

His excellent hundred comes to an end after Labuschagne's quality throw #AUSvIND pic.twitter.com/6Ke1SWI2xm

This century ensured Rahane’s rich vein of form at the iconic MCG as well. He had scored his highest overseas score of 147 during his first test in 2014, following up with this hundred.

After notching up a sizeable lead of 131, Australia are currently 66-2 and trail by 65 runs.