Amidst the recent political tensions in India after a cowardly attack on CRPF troops in Pulwama sector of Kashmir killed 42 Indian soldiers, the diplomatic and political climate has been on the rise between the two nuclear power i.e India and Pakistan.

Even the cricketing world has condemned the ghastly attack on our forces. Former Indian cricketer Harbhajan Singh has also called for a boycott of Pakistan during the ICC world cup 2019. 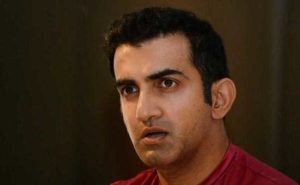 Now former Indian opener Gautam Gambhir has said that India should forfeit a match against Pakistan at the ICC world cup 2019 and said that there cannot be conditional bans.

“I am sure it’s going to be difficult for India to boycott them in ICC tournaments but stop playing Pakistan in the Asia Cup,” said the left-hander.

He also gave an example of 2003 world cup when the England cricket team refused to play Zimbabwe in protest of the Robert Mugabe regime.

“England decided in 2003 and they wouldn’t go to Zimbabwe, they forfeited. If BCCI decides not to play against Pakistan, everyone should be mentally ready to give those two points,” he said.

“There could be repercussions and we may not qualify for the semi-finals. No media should blame the Indian team if they plan to boycott playing Pakistan,” he said.

Gambhir also said that if India and Pakistan meet in final then they should forfeit the final as well.

“Two points are not that important. Country is important, those 40 soldiers who lost their lives are far more important than a cricket match. If we let go of a World Cup final, the country should be ready for it,” Gambhir said.

“All of us need to decide if sport is more important or lives of our soldiers? I am all for facing a backlash if the international sporting federations decide to ostracize us. The sentiment of the country is far more important than sports, Bollywood, art or culture,” he said.