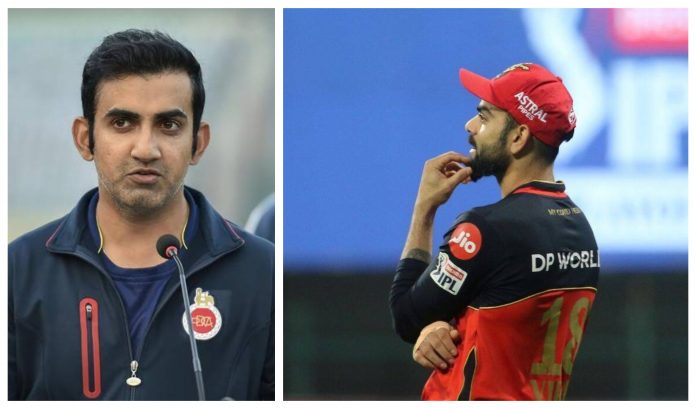 Royal Challengers Bangalore’s (RCB) campaign in the ongoing Indian Premier League has come to an end. After having started quite well initially, RCB failed to carry forward the momentum in the last five matches of the league. Although they qualified for the playoffs despite losing their last five matches of the season, they failed to win against Sunrisers Hyderabad in the eliminator on Friday and lost the game by six wickets.

Once again, RCB’s chase fro the maiden IPL title ended in a bizarre way. They failed to do well in the last three editions but this time the hope was high as they had plenty of quality players. Virat Kohli once again led the side but failed to deliver the results for them. And, former India opener and two-time IPL winning captain Gautam Gambhir opened up about his captaincy after RCB’s loss to SRH.

“It’s not only about one year, it’s not only about this. I have nothing against Virat Kohli but somewhere down the line, he needs to put his hand up and say, ‘yes, I am responsible. I am accountable,’ he added.

“Eight years is a long, long time. Look at what happened to R Ashwin. Two years of captaincy [for the Kings XI Punjab], he couldn’t deliver and he was removed. We talk about MS Dhoni, we talk about Rohit Sharma, we talk about Virat Kohli…not at all. Dhoni has won three [IPL] titles, Rohit Sharma has won four titles, and that’s the reason they’ve captained for such a long time because they’ve delivered.

I’m sure if Rohit Sharma wouldn’t have delivered for eight years, he would have been removed as well. There should not be different yardsticks for different people,” he further expressed.

While batting first, Bangalore managed to put up only 131 runs in 20 overs where only AB de Villiers (56 off 43) looked comfortable in the middle. However, RCB bowlers tried their best to restrict the SRH batsmen with early dismissals but Kane Williamson’s (50* off 44) brilliance sealed the deal for Hyderabad.