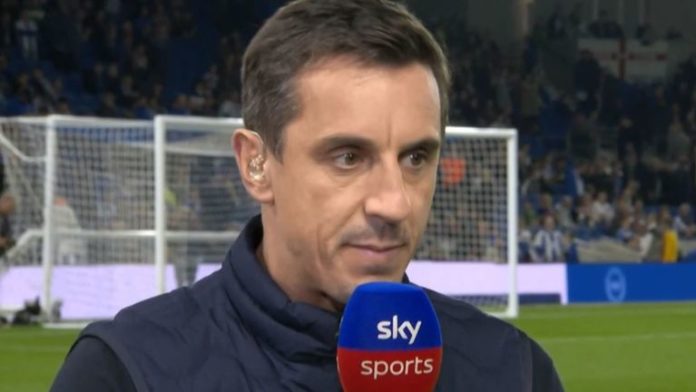 Prior to an all-important game against Newcastle at Old Trafford , newspapers and tabloids had some radical headlines for the radical scenario in the United dressing room. A popular headline read that Jose Mourinho would be axed irrespective of a win or a loss this weekend. That’s when Manchester United legend and now a sky sports expert Gary Neville came to the Portuguese’s defence.

The former United captain responded to the claims in Saturday’s Daily Mirror, insisting it is a “disgrace” if they are true and the news has been leaked to a journalist. Neville was adamant that those running the football operation at Manchester United are not qualified, arguing that changes need to be made at boardroom level, rather than managerial level.

“To be honest with you, I’m furious.

“I was furious three or four years ago when David Moyes was sacked and it broke a day before to journalists.

“I think about how the club is being operated. If this is true – and we don’t know if it is – and Jose Mourinho is going to walk out at Old Trafford on Saturday almost as a dead man walking, those fans will absolutely turn towards that boardroom. It’s unacceptable.

“I have to say Jose Mourinho will get the biggest support he’s ever had in his life in that ground – and I will be there to give it to him.”

His impromptu expression on the issue became a hot topic and Neville himself had things to say later about his passionate moment on live television.

“In television, you can sometimes have a week to think what you’re about to say, but sometimes something just hits you mid-show that you’re not prepared for and you have to react and that’s what happened on Friday evening.

“I spoke from the heart in terms of what I felt, and I’ve felt it for quite a bit. The problem at the club isn’t just with the manager at all. The manager takes responsibility for the performances, but the recruitment and the way the club has been operated, the leaks over the last few years to me have been undermining the managers and the football staff.

“I feel there’s maybe a tug-of-war (between Mourinho and the board) and that needs to stop.”