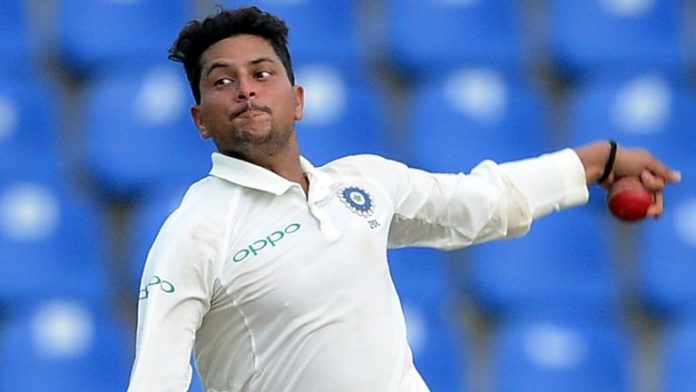 As an Indian captain, the first thing you do to prepare for a home Test series is look for your spinners. More often than not on flat-turning wickets, they are the bunch-who are going to get you those 20 wickets to win the match. India’s always produced exceptional spinners and of the current crop, apart from Ravichandran Ashwin and Ravindra Jadeja-Kuldeep Yadav is the one who stands out.

Kuldeep’s deceptive Chinaman bowling and the natural guile he possesses makes him a genuine wicket-taker. The fact is every time Kuldeep has played for India, he has done exceptionally well. So his exclusion makes for a curious reading and raises doubts about how seriously Virat Kohli and the team-management consider him to be a Test cricket material.

With Ravindra Jadeja ruled out of the first two Tests against England due to an injury, many former players and pundits had backed Kuldeep for a place in the team.

However, to everyone’s surprise- left-arm spinner Shahbaz Nadeem, who was on standby, for the first Test in Chennai got the nod after spin bowling all-rounder Axar Patel was ruled out.

Notably, Kuldeep has been warming the bench for more than three months now, including the tour of Australia, where he featured in just one ODI. So his innocuous absence raises more questions about his long-term future.

The 26-year old Kuldeep has so far played six Tests and picked 24 wickets. He played his last Test against Australia at Sydney in January 2019.

Notably, India head coach Ravi Shastri had backed Kuldeep Yadav as the number one spinner in overseas Tests following India’s historic 2-1 series win in Australia in February 2019. Surprisingly, Kuldeep has not played Test cricket since then.

Virat Kohli, who is known for his strong belief in playing five bowlers too had sounded out an optimistic note for the left-arm bowler. “There is a time for everyone. But now Kuldeep is our frontline number one overseas spinner,” Kohli had said. But somewhere those words of certainty have since evaporated and all Kuldeep Yadav can do is warm the bench and ponder.

In recent years along with Yuzvendra Chahal, Kuldeep has been the backbone in Virat Kohli’s planning for limited-overs cricket. He was key in India’s plans for the 2019 ICC Cricket World Cup. And after a game against Pakistan, there was something apparent in Kuldeep Yadav’s statements. The player alluded about the confidence of the captain playing a big role in the former’s performances. Afterall a spinner thrives on the confidence the captain has in his abilities. It is hence no surprise that there has been a downward swing in the career graph of this mercurial talent who at times needs a quiet word and cajoling of his captain.

After featuring in three games in the ongoing IPL 2020 for the Kolkata Knight Riders (KKR), Kuldeep Yadav was unceremoniously dumped by the franchise from their playing-XI despite the player not producing any particularly horrendous performance. So the player’s birthday wish to Gambhir could have been a thinly-veiled way of expressing his resentment for being dropped from the team.

Each time KKR tried to play him, he disappointed. By now, the opposition knows that if you attack Kuldeep, his shoulders will drop as quickly as the ball will disappear out of the ground. Pile on the agony further and the spinner becomes a complete non-entity.

It is funny how when things start to go awry, everything falls apart. Kuldeep, who emerged as one of the most successful spinners from India’s tour of Australia in 2018-19, has not been given a chance in the Test side for two years now.

But since then, India have played 11 Tests including the ongoing series opener against England but Kuldeep’s long wait for a comeback continues. In Australia, Washington Sundar leapt from behind and got his Test cap after being taken as a net bowler.

Same for Shahbaz Nadeem, who was in the reserves for the first two Tests but was inducted into the eleven in the Eleventh Hour after Axar Patel sustained a knee injury. On a day when both Nadeem and Washington looked completely ineffective on a docile pitch, Kuldeep could’ve been the answer.

But for now, all he could do is play the waiting game!