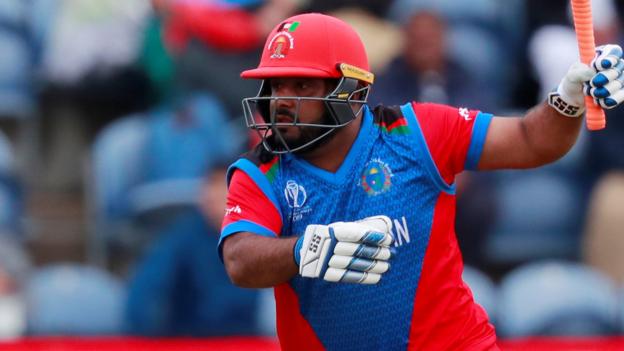 Afghanistan cricket has evolved and emerged over the years. And with Afghanistan cricket, Mohammad Shahzad, their wicket-keeper and opener has also evolved. Having played for Afghanistan for over 10 years now, Shahzad is their highest run-scorer in ODIs. 2727 runs in 84 innings at an average of 33.66 are the stats of this experienced player.

Mohammad Shahzad has been one of the main players for the Afghanistan side. However, after a tragic turn out of events, Mohammad Shahzad will miss the rest of the World Cup.

Shahzad did not get a chance to play the 2015 World Cup. However, Shahzad was a part of this year’s mega-event. During the first warm-up game, Shahzad had to retire hurt due to a knee injury. However, he came in for the next warm-up clash against hosts England.

He also played the first two games of the main round as well, against Australia and New Zealand. However, he failed to perform with scores of 0 and 7. After the New Zealand game, it was said that Shahzad had got the knee injury back, and was ruled out of the tournament. 18-year old Ikram Ali Khil replaced an experienced Shahzad in the Afghanistan World Cup squad.

After his exclusion from the tournament, Shahzad made a shocking revelation. According to Shahzad, he was forcefully pulled out of the World Cup. There are no concerns whatsoever with his fitness.

He also said that no officials from the Afghanistan Cricket Board talked to him before pulling him out. A popular journalist, M.Ibrahim Momand posted a tweet which included the cricketer’s message.

"I have no problem or injury & fully fit but @ACBofficials pulled me out of the squad by force without any consultation"Says @MShahzad077 who is ruled out of @cricketworldcup due to knee injury in his recent voice clip to a media in #Kabl as he is set to return home tomorrow. pic.twitter.com/tqagZST9c2

Ravi Shastri has a message for those who missed out on...