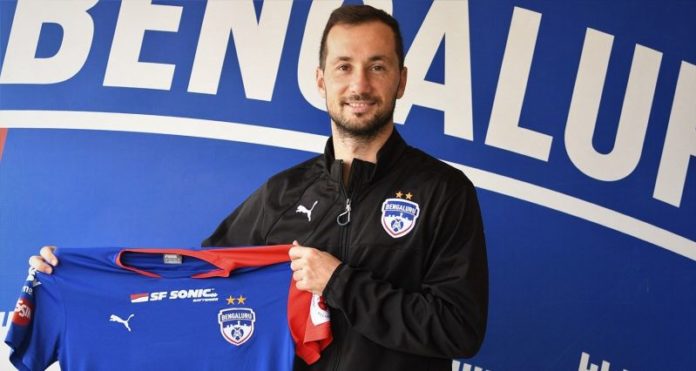 It was January 2019 and Luis Manuel Villa Lopez – known simply as Luisma – had just become a free agent after terminating his contract with SD Ponferradina, a Spanish third-division side in the north-west of Spain.

However, not having a club to represent wasn’t to be a permanent dilemma for the midfielder. India came calling. More precisely, Bengaluru.

“At first, I said no, because I had no desire to leave,” said Luisma.

“But, the more they told me about the league, the more I saw it as an amazing opportunity to continue playing football. So, the following morning, I accepted the offer.”

Bengaluru were in a unique spot. They had finished second in the previous season and were already halfway through that season – but had an empty spot on their roster to fill.

ISL rules dictated that every team could have up to 8 foreigners but that only 5 could be fielded on the pitch at any given time.

Conveniently for Luisma – who literally walked in midway through the season – that meant he wasn’t thrown straight into deep waters.

“In my case, I didn’t start many games but normally came off the bench to try and make a difference,” says the attacking midfielder, who was given the No. 9 shirt but tended to play in the hole.

However, his quality and impact was undeniable.

Bengaluru would go on to top the table but had to overcome a spirited NorthEast United in the two-legged playoffs first.

After losing 2-1 away in the first, they were still trailing on aggregate when Luisma was brought on with 22 minutes of the tie to play in the second.

Six days later, on 17 March, it was a showdown between them and Goa in the finals. 70 minutes and no goals – but Luisma’s introduction sparked life into the game. Bengaluru eventually edged their opponents out 1-0.

Luisma wasn’t directly involved in any goal – but his quality on the ball proved catalytic to Bengaluru’s wins.

A youth product of Racing Santander, Luisma was only 18 when he made his La Liga debut. He would play at the club for three more seasons, but could only manage 3 substitute appearances in that time – notably, however, one of them was against Barcelona at the Nou Camp.

He then travelled around, plying his trade in 4 different clubs in the next 3 seasons until England came calling in July 2013. He was asked to trial at Barnet, who were then managed by Champions League winner and former Dutch international Edgar Davids.

Unsurprisingly, Luisma earned himself a contract and featured reguarly for the side under the Dutchman. However, when Davids resigned and was replaced by Martin Allen in January, his game time decreased.

The lull wasn’t to be though.

“At the end of the season, we had a meeting in Martin’s office,” Luisma says.

“I already sensed that he didn’t think much of me, and then he gave me a piece of paper with my statistics for that season [four goals, six assists].

“He pointed to the assists and said: ‘Not bad’, before pointing to the goals and saying: ‘Not good enough.’ He circled the four with a pen and looked me in the eyes for 30 seconds before saying: ‘If you score 10 goals next season, we’ll be champions.’

“He said it deadly seriously, before breaking out in a smile from ear to ear. And that’s how it happened.”

Luisma would score 13 goals that season. Barnet would be crowned champions by 1point. However, instead of ejoying the fruits of promotion, the midfielder returned to his home country.

So why go back abroad?

“It was a difficult decision,” he says, “but in the end, it was the right one. You always have to think that whatever decision you make is the right one.

“I have great memories of Bangalore. They are three months that I will never forget.

“The relationship between the players was really good. The coaching staff made sure there was a good atmosphere around the place, and any dressing room that feels like a family goes a long way together.

“The Indian fans were also incredible,” he says. “They really surprised me for the better.

“On the day of the final, we arrived on the coach, and I remember seeing all the people jumping for joy. Every single person in their colours – both for Bengaluru and Goa – mixing among themselves, no bad vibes.

“It was incredible to see them enjoying themselves like that.”
For the first time in his career, Luisma – who only turned 30 in August – is now without a club.

Should nothing come up, then he’s considering taking entrance exams for the police force, but he hasn’t given up hope of continuing his remarkable career just yet.

“It is strange,” he admits, “because this is a new situation for me.

“It’s frustrating, but I am keeping myself in shape for any moment that a new opportunity may arise.

“I’m very clear in my mind – I want to keep playing football, to have fun on the field of play, be in a dressing room with teammates. I miss everything that surrounds it but, above all, I want to carry on enjoying doing what I love most.”

Given how many sliding-door moments have defined his story so far, you wouldn’t bet against there being at least one more chapter to go.


“Lots of the players and coaching team were living in these apartments along with some locals.

“To have people from your own country helped make the distance seem more bearable. I was lucky to be there at the same time as Javi Pinillos, the goalkeeper coach from my time at Racing. Rhe minute I set foot in Bangalore he was there to help me with whatever I needed.

“Above all, we used our free time to rest. We’d stay in to watch matches, go to the city centre to have a coffee – more or less the same things that you would do anywhere.

“We liked to go to the city centre on a tuk-tuk, Travel around the city, visit the shops, eat in restaurants.”

“They’re great players. They are very professional and work hard to improve and be able to help the team.

“Sunil [Chhetri], for example, is an icon in his country who has scored more goals for the national team than anybody else. He is 35 years old but trains like he is 18.

“For the soccer players in their country, and especially for the youngest ones, that is something very important because it shows that, with ambition, sacrifice and work, you can achieve great things.

“[On Chhetri] he is a player that is out to get goals. He is very quick and very clever, so he knows how to make the most of chances to get behind the defence.

“Gurpreet [Singh Sandhu] was a goalkeeper in great shape.

“Udanta [Singh] was among the fastest players I’ve ever seen – that’s why they called him ‘Flash’ – and he’s only 23.

“On the pitch they are very hard-working and off it they are just normal guys, although some are funnier than others! They were of a good level and they keep improving.”
How did you communicate?

“We all communicated in English, some better than others, but ultimately we could all understand each other.

“My English isn’t great but it’s not bad, either. I can get by quite well.

“In London, at first, I didn’t talk much through fear or embarrassment in case I got something wrong. After that, I began to loosen up and quickly improved.

“I learned the language in Spain and took another course, so I arrived in India prepared.

How did the ISL compare with playing in England?

“It’s a little different. The fifth division [in England] was much harder, with lots of physical contact, lots of force, long balls, 4-4-2.

“The Super League, on the other hand, is a little slower, with more control of the ball and players with great individual technique. They are very different leagues.”
Do you think more players should go abroad for opportunities?

“Definitely. Lots of Spaniards end up in India or other countries.

“We have very good players in Spain, and more and better players are leaving.

“I really enjoyed having played abroad and it is something that every footballer should try and least once in their life.”
What was the final like?

“For me it was just one more game.

“I started on the bench and came on in the second half, with the score at 0-0, thinking how I could do my best to help the team.

“I am used to controlling my emotions quite well. I only think about having fun, trying to do things well, enjoy the moment. I don’t tend to get nervous because I don’t think about it. I’ve spent plenty of years practising this sport.”