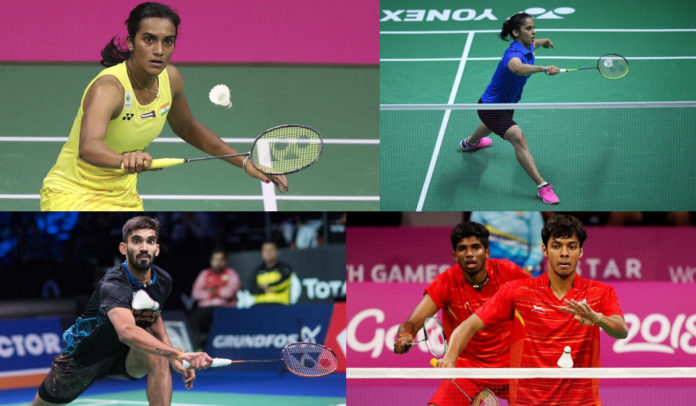 India’s singles run in the 2018 French Open ended after Saina Nehwal, PV Sindhu, and Kidambi Srikanth bowed out in the quarterfinals to Tai Tzu-Ying, He Bingjao, and Kento Momota respectively. However, the duo of Satwiksairaj Rankireddy and Chirag Shetty made it to the semi-finals after overcoming the pair of Manu Attri and B.S. Reddy in the Men’s Doubles.

PV Sindhu struggled to find her form as the Chinese thrashed her 13-21, 16-21 in straight sets. Earlier in the day, Saina Nehwal had a commanding 4 set points in her first set against the World No.1. But, the Asian Games gold medallist showed enough grit and perseverance to not only level things up, but also pick up straight six points to win the opening encounter 22-20. She showed no mercy towards Saina in the second set and won the match 22-20, 21-11. With this loss, the Beijing bronze medallist has suffered twelve straight losses to the 24-year-old and has a poor 5-14 overall record against her.

Srikanth Kadambi, too, lost his games in straight sets after the Japanese World No.1 hammered him 21-16 and 21-19.

Earlier on Thursday, the Indian duos of Satwiksairaj Rankireddy and Chirag Shetty, and Manu Attri and B.S. Reddy overcame two Chinese pairs to set up an all-Indian quarterfinal.  It was the youthful Satwiksairaj and Chirag who stood tall above the experienced campaigners as they defeated them 21-17, 21-11 in straight sets.

They will next take on the Indonesian World No.1 pair of Marcus Fernaldi Gideon and Kevin Sanjaya Sakamuljo in the semi-finals on Saturday.