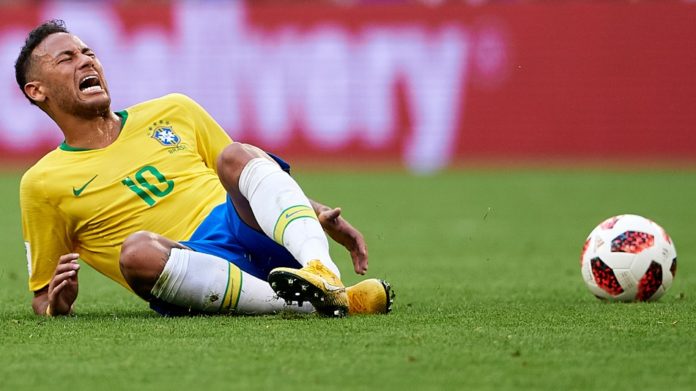 Brazil was beaten by a better and sharper Belgium yesterday. They lost 2-1 to the Red Devils. The five time World Champions looked pretty shabby yesterday when they failed to capitalize on many chances and on the other hand, Belgium capitalized and bottled the Brazil side.

Roberto Martinez’s men now face 1998 winners, France in the semis for a place in the Final.

But even after all this, there was one person from the Brazil side who stole the spotlight. Who other than Neymar, who rolled and dived his way to the World Cup Quarters and showed some goals and attacking flairs in between.

Valon Behrami standing over Neymar & laughing at him for rolling around like a dying duck, while getting booked, is my favorite picture of the WC so far. pic.twitter.com/u8fTELoAB3

Twitterati is known for their cruel way (sarcasm intended) of dealing with a player’s misery and it didn’t stop in Neymar’s case as well.
Here are some of the best ones:-

Neymar and Brazil rolling all the way home pic.twitter.com/vT6ppZP5jS

Some digs on Brazil as well…

Brazil just can’t perform against these colours…it’s their kryptonite 😂😂😂 pic.twitter.com/CFRr2grVHn

Brazil can samba at the airport now

Questionable dive by Mbappe in the first game of the day…

These kids are really out here trolling @neymarjr like that 😳 pic.twitter.com/U4pf8iopc7

Other players will go Brazil through the plane and Neymar like this.😂 #BRABEL #WorldCup pic.twitter.com/IGrZtOGErg

In 2014 Brazil tried to use the emotion of Neymar’s injury to beat Germany (lost 7-1). In 2018 it was all about his rushed comeback from injury and getting the ball to him. A great country blinded by a brand.

Neymar the most expensive player in football history be like : pic.twitter.com/OESTvgHC8H

When coach called out neymar the player's eeaction imitating him

Neymar in the street! 🤣 pic.twitter.com/eo38zzc5vp

..And one for everyone!

FIFA World Cup 2018 : Belgian masterclass proves too much for Brazil.