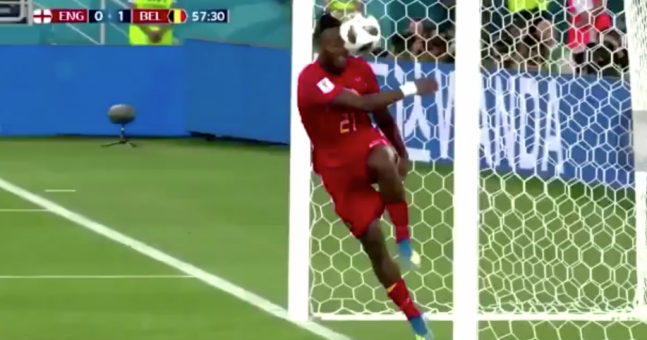 The Group G encounter between Belgium and England ended 1-0 as former Manchester United player, Adnan Januzaj scored a wonderful goal to put Belgium at the top of the group. But just after the goal, there was a situation that made fans on social network namely Twitter go bananas.

Right after the goal, Belgium striker Michy Batshuayi was seen in the England goal, mouth booting the ball in celebration. Unfortunately for the Chelsea forward, the ball rebounded off the post with some force and straight back to his face. That became a trend for many numbers of meme material and hahas to come.

Fans had a great time at the expense of Mitchy’s fault.

How my good deeds for others come back to me #WorldCup pic.twitter.com/DPEeDT3Ovw

Hahaha don’t know what was better the goal or michy batshuayi #EnglandvsBelgium pic.twitter.com/nJlmzEDbBj

The number of clips of Michy Batshuayi kicking himself in the head with a football I’ve seen in the past hour. Still not bored of it.

Great goal from Januzaj – but Batshuayi has just immortalised himself in the form of internet memes. pic.twitter.com/JXar2T5hFy

When she says she loves you, but as a friend! 😂#ENGBEL #ENG #BEL #WorldCup #Rusia2018 pic.twitter.com/LxWs8S4j4D

When you think you’ve done well in an exam and then get your grade back….. #ENGBEL #WorldCup18 pic.twitter.com/JnjSO5OlDu

When life is going pretty good and then the universe throws you a curveball #ENGBEL pic.twitter.com/Rv6TgRw2BP

When you make a poor life decision and it comes back to smack you in the face #ENGBEL pic.twitter.com/VD9rCxPNM3

The number of clips of Michy Batshuayi kicking himself in the head with a football I’ve seen in the past hour. Still not bored of it.

This might just be the first shot Michy Batshuayi has got on target all match. pic.twitter.com/xra9uokVYh

Highlight of the World Cup so far is undoubtedly Michy Batshuayi kicking the ball into his own face. pic.twitter.com/cbBQYzXr0I

Even his team-mates took a dig at him.

Guys it's all good between them 🙏🏽 pic.twitter.com/1fLdTTc1eE

But he was sporting enough to face his trolls and took this pretty lightly. All credits to Michy Batshuayi!

The second just before I knew I f*cked up #InternetUndefeated 😂 pic.twitter.com/wAf5Wt6QvK

Pretty sure this was the main highlight of the World Cup till now!

FIFA World Cup 2018: Tunisia have the last laugh as they score all the 3 goals in a 2-1 victory over Panama