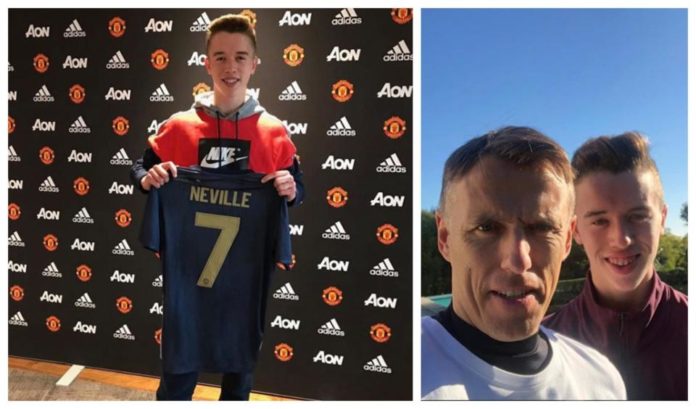 Harvey Neville rejoins his father’s and uncle Gary Neville’s former club after a stint in Spain with Valencia.

Harvey follows dad Phil – the England women’s manager and uncle Gary after signing on his 16th birthday. The Neville brothers made a combined 664 league appearances for the Old Trafford side.

His father Phil Neville was thrilled by the news and posted this on his Instagram: “Proud of you @harvey.neville 🔴⚪⚫ go follow your dreams!!!”

Uncle Gary Neville was also delighted on hearing his nephew’s signing and posted the following on his Instagram: “Congratulations @harvey.nevilleyou’ve practiced so hard to get where you are! Keep going 🔴⚪⚫”

Congratulations @harvey.neville you’ve practiced so hard to get where you are! Keep going 🔴⚪️⚫️

The youngster himself was visibly overjoyed having joined the club he loves, posting: “I am very proud and excited to have signed for the club I have supported my whole life 👹👹@manchesterunited.”

Harvey has genuinely impressed the academy with his technical attributes with some even comparing him to Red Devils legend and former England captain David Beckham.

Now that he has signed with Manchester United it remains to be seen what new chapter the Neville dynasty might write.