Sarri’s first of many changes to Chelsea has been his decision to give the captain role to the Belgian. Hazard is a high profile target for Real Madrid as a replacement to Cristiano Ronaldo, who moved to Juventus this summer. Real are willing to offer as much as £178m to acquire the services of the Chelsea play-maker. Sarri, as an act to keep his star man at the team this year, has decided to give the captaincy to Hazard hoping that it will persuade him to pen down a new contract at Stamford bridge. Apart from Hazard, spanish right back Cesar Azpilicueta and midfielder Cesc Fabregas are other options available for Sarri to hand over the captain’s responsibilities. 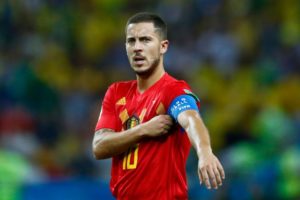 Real Madrid are hot on Chelsea’s tail to swoop in Hazard from the English side as he, along with PSG’s Kylian Mbappe are the two most likely players to replace Ronaldo’s legacy at the Santiago Bernabeu.