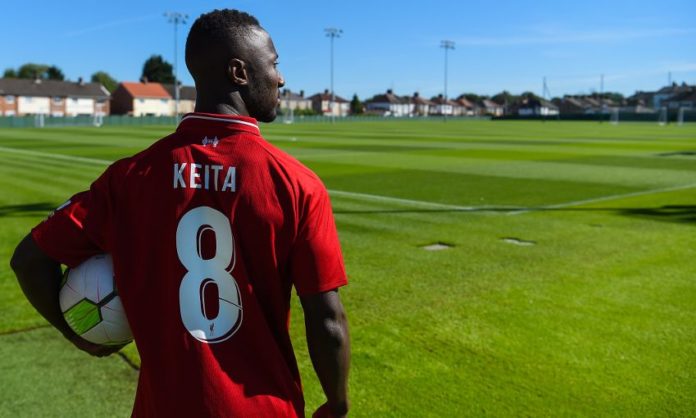 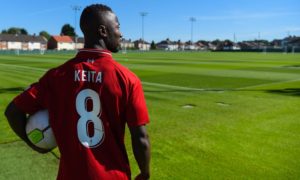 Liverpool has confirmed that their new signing Naby Keita who officially joins the club on July 1st will wear the number 8 jersey which was previously worn by their club legend Steven Gerrard.

Keita who left the German Club RB Leipzig will cost Liverpool £52.75m after Leipzig finished sixth and qualified for the UEFA Europa League. He will join the likes of the newly signed defensive midfielder Fabinho and captain Henderson to provide a much needed stability in the midfield which was lacking last season.

Much appreciated for his all round ability, Keita has so far had a stellar time in Bundesliga. He has netted 14 goals for Leipzig and also assisted 12 times. Added to this he has won 146 tackles and created 79 chances which makes for an impressive read.

Keita said that he was honoured to receive the Jersey from the club legend and also added that he was excited to play for the Mersyside Club and showcase his talent.

“Firstly I am somebody that plays in a defensive role and we need to start with that,” he told LFC TV. “But then I need to bring the ball forward and help the attack. I spoke with the coach, who told me about the project for the team and that motivated me to be here,” he said.

Keita was also in high praise for Liverpool’s amazing season under Klopp and also wished to contribute to similar success in the future.

“When you see how they performed last season it makes me want to do the same and to be a part of this team,” he said.”I would like to be able to achieve a similar kind of season with them next season – but even better.”

Wishing Naby Keita all the best at his new club and to carry the legacy of the number 8 jersey.

Naby Keita has revealed how he was left astounded when Steven Gerrard handed the No.8 jersey over to him: https://t.co/G3708QjuPH#NK8 pic.twitter.com/bFAFVFWKcx