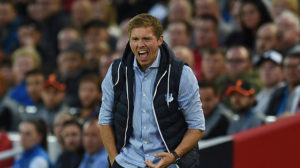 Hoffenheim manager Julian Nagelsmann has decided to leave the club at the end of the next season and join their fellow Bundesliga rivals RB Leipzig.

The 30-year-old joins from @achtzehn99_en and has agreed a contract with #DieRotenBullen until 2023. #Nagelsmann2019 pic.twitter.com/DVRrvBHR4c

Nagelsmann became the manager of Hoffenheim at 28 becoming the youngest manager in Bundesliga history. He took over a side that was then struggling in 17th place. He lead them to survival and followed that with a 4th place finish the season after.

In the recently concluded season Nagelsmann lead Hoffenheim to a 3rd place finish thus leading them to a UEFA Champions League qualification. By virtue of this Hoffenheim became the smallest city to participate in the tournament.

Even though his contract runs till 2021, he has decided to activate the exit clause and join RB Leipzig. Earlier Arsenal also identified him as one of their candidates to replace Wenger.

“I owe it to TSG and all of its employees, as well as to the tram and the fans, that this historic season in which we are competing in the Champions League for the first time, to not have any constant assumptions about my future,” Nagelsmann told the Hoffenheim club website.

“Now everyone knows what they are about and we can focus professionally on the upcoming tasks. Everyone knows I will be doing everything I can to reach our ambitious goals until the last hour of my commitment to TSG.”

Wishing Nagelsmann all the best for the upcoming season and his future.