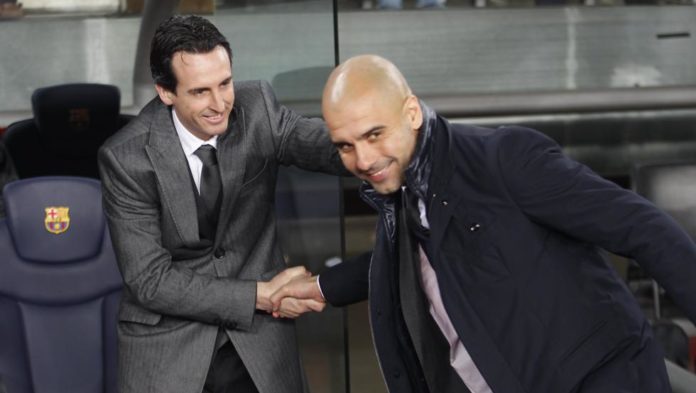 Ahead of their clash at the Emirates on Sunday, Unai Emery admitted that Pep Guardiola is better than him.

Unai Emery will take charge of his first competitive match as Arsenal manager with Guardiola in the opposite dug-out.

Emery had locked horns with Guardiola before in 10 different occasions but has never come out as the winner.

The new Arsenal gaffer admits that Guardiola has always been the better one both as a player and a manager, but has welcomed the challenge posed by his counterpart.

He explained that they started their careers as coaches at probably the same time but Guardiola’s career is statistically better than him. But, he likes playing against him as the demanding nature of such a match motivates him.

He also said that when they were in Spain, each match against Barcelona with Valencia was very exciting.

Aaron Ramsey is fit to play in Sunday’s game after recovering from a calf problem sustained in a pre-season friendly against Chelsea.

Emery also said Ainsley Maitland-Niles is expected to start at left-back, a position he filled in at last season, with Saed Kolasinac sidelined for two months and Nacho Monreal only returning to training on Friday after picking up a knee problem at the World Cup.