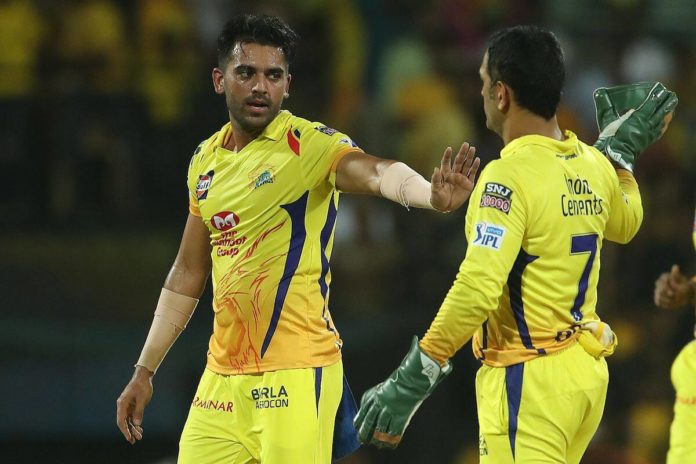 Chennai Super Kings speedster Deepak Chahar will start training from Friday having tested negative for coronavirus. BCCI granted clearance to resume training with the team after recovering from the virus in the United Arab Emirates.

Chahar, who entered the team’s bio-bubble on Wednesday after returning two negative tests, had to undergo a cardio vascular test as per BCCI protocol before he could resume practice.

“He will start training from today. He has got necessary clearance from BCCI. The team is training hard and in good shape. We are looking forward to our first game,” CSK CEO Kasi Viswanathan told PTI.

“We will miss our senior players but at the same time, it is an opportunity for others to stand up and prove themselves. We are confident of doing the job well with what we have.”

CSK were the last of the teams to commence training after 13 members of their contingent tested positive. Another setback was Suresh Raina and Harbhajan Singh pulling out of the tournament due to personal reasons.

Chahar stated that he watched the team’s practice sessions with a positive outlook at every stage while in self isolation. He further revealed that he tried to do some training, in order to ensure proper fitness on making a comeback to the team. The pacer seemed confident over his physique, having bowled in the nets during a team training session.

“I was watching the team’s practice sessions. I always take things positive. I tried to do some exercises, some training so that I can be fit when I come back. I posted few things. Hopefully, I bowled yesterday, so I am feeling pretty well and in good shape”, Chahar said.

Meanwhile, there were reports that CSK could sign Dawid Malan, England’s batsman and the No. 1 ranked T20I batsman, as a replacement for Suresh Raina, who chose to withdraw due to personal reasons.

Viswanathan, though, denied the rumours stating that CSK weren’t eligible to sign a foreign player.

CSK also are without the services of Harbhajan Singh who also is missing the tournament for personal reasons.

In more news, CSK’s Dwayne Bravo did not bowl in the final of the Caribbean Premier League, which his side Trinbago Knight Riders won. Bravo was on the field through the 20 overs and was said to have been playing with a slight knee injury.