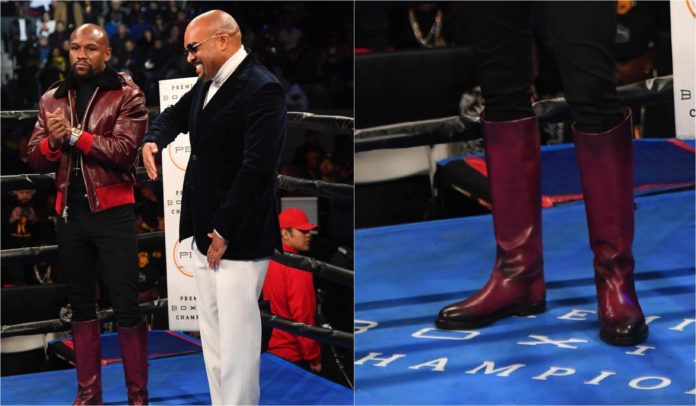 Boxing legend Floyd Mayweather Jr was mercilessly trolled on Twitter for wearing a silly outfit while attending a boxing event which was headlined by his prodigy Gervonta ‘Tank’ Davis and Mexican slugger Hugo Ruiz at the Dignity Health Arena in Carson, California. 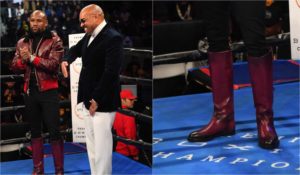 Davis knocked out Ruiz in the first round, but it was Mayweather who became the butt of the joke. Floyd Mayweather was shown in Davis’s changing room offering his advice on the Showtime network broadcast. Floyd rocked knee-length red boots along with his outfit.

However, it didn’t take long for Twitter to get creative and memes started floating around on Social Media. According to some, Floyd’s outfit was better suited for a horse race venue than a boxing match.

Here are all the hilarious tweets:

Why Floyd got on these horse trainer boots #shobox

Fun fact: Tonight is not the first time Floyd Mayweather has been spotted wearing your aunties favorite boots. In fact, he loves that fit. pic.twitter.com/Te1JbCzb1Y

Mayweather and his damn horse jockey boots be killing me man #DavisRuiz pic.twitter.com/Or96CcdMtX

Mayweather and his boots 😂 pic.twitter.com/2TRgzJHMgb

He got on them Floyd Mayweather boots 😂😂 https://t.co/k7G8fEacgP

why is #Mayweather wearing his momma boot

Floyd Mayweather first flaunted those boots back in 2014.

Floyd Mayweather dressed like Mary J. Blige. Bout to tear down a performance of No More Drama. pic.twitter.com/hbdPgoP7mM

What do you guys think of Floyd Mayweather’s outfit?