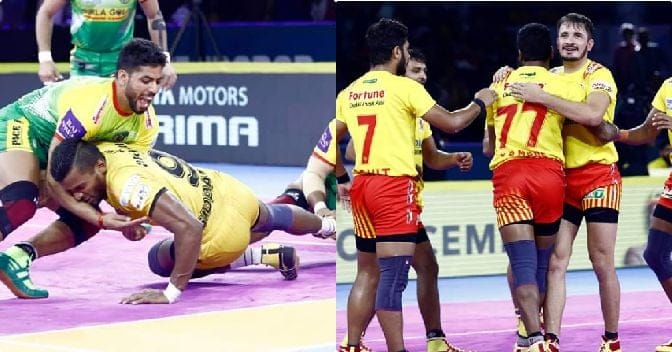 The last day of the Hyderabad leg of PKL season 7 saw the Telugu Titans lose their fourth game on the trot in front of their supporters at the Gachibowli Indoor stadium at Hyderabad. Patna Pirates who had lost their first match against the defending champions Bengaluru Bulls, defeated the Telugu Titans. Gujarat Fortunegiants continued their good form as the Yoddhas lost another game by a remarkable margin of 25 points. With this victory against UP Yoddhas,the Fortunegiants are now top the table. 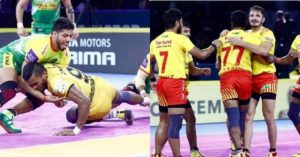 Yet another game and yet another fine performance by the Fortunegiants courtesy star raider Rohit Gulia and star defender Parvesh Bhainswal who had a 100% strike rate in today’s game against the Yoddhas. It was another silent day for the Yoddhas star raider Monu Goyat as he could only get 2 raid points.

A fine performance by the captain Pardeep Narwal and defenders Monu and Jaideep helped the Pirates win their first match of the tournament. The Titans star Siddharth Desai again failed to deliver the goods as he could only manage 5 raid points from 12 raids. The star from the previous night Suraj Desai could only manage 1 raid point. With this loss the Titans lost all their home fixtures.

The tournament will now move to Mumbai where U Mumba will face Puneri Paltans and Jaipur Pink Panthers will face the Bengal Warriors.