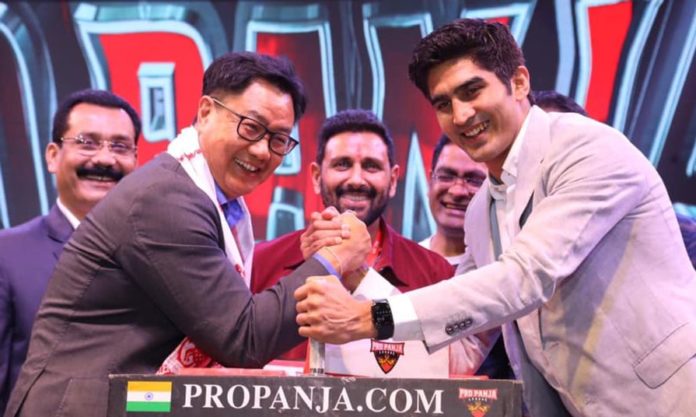 The first ranking tournament of Pro Panja League was a grand success. Arm Wrestlers from 15 states took part in this tournament.

Arm Wrestlers from Punjab showed their prowess as they managed to bag 15 medals in total in the inaugural season. 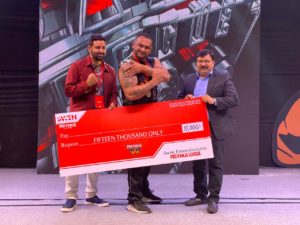 What made this event a grand success was the presence of the hon’ble minister of sports and minority affairs Mr Kiren Rijiju and WBO Asia- Pacific and WBO Oriental super middleweight champion Vijender Singh.

As soon as the prelims began, arm wrestlers from different part of the country battled in hopes to seal their berth in the finals.

The most entertaining bout of the night was between 100kg finalists Sanjay Deswal and Sunil Kumar. In an action-packed battle of the heavyweights, Sunil Kumar and Sanjay Deswal gave us a tremendous back and forth throughout the three rounds.

Sunil managed to bag the first round, but Deswal bounced back in the second after the referees tied their hands with a strap as the arms of both arm wrestlers kept slipping.

In the third and deciding round, Sunil Kumar and Deswal performed in what was one of the most prolific and memorable rounds of the night. While it felt like Deswal had Sunil pinned, the Punjab based arm wrestlers throttled his pace and managed to beat Deswal in the third.

After two rounds, both arm Wrestlers were 1-1 heading into the first, but in the third round, it was Parmeet Singh who prevailed and managed to secure the victory.

The hon’ble union minister was seen seated beside Parvin Dabas. The entire concept of Pro Panja League is the brainchild of Parvin Dabas and Preeti Jhangiani. Hon’ble union minister Rijiju Ji enjoyed the concept so much that he assured the audience that even though Arm Wrestling is not an Olympic sport, he will be doing his best to promote the sport in India and assured government assistance in spreading the sport throughout the country.

The event was sponsored by Patanjali DivyaJal and Fruit Forest India. Even during the mild Delhi winters, the athletes were absolutely oozing with testosterone and Adrelenine of the Pro Panja League and throughout the day they were seen munching on the goodies provided by the sponsors throughout the day.

Pro Panja League 2020: Why arm wrestling is the latest sensation to hit India!