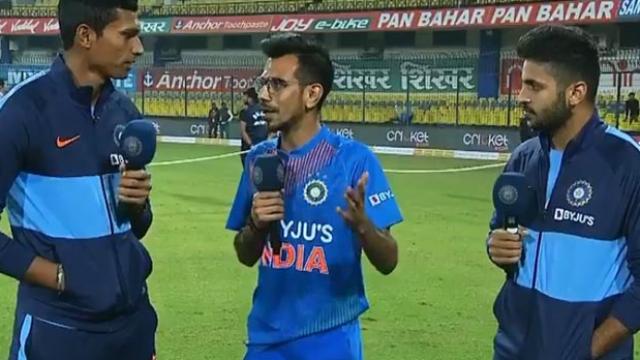 Youngster Navdeep Saini stole the limelight in the 2nd T20I between India and Sri Lanka; with the hosts registering an easy 7-wicket victory over their southern neighbours on Tuesday. Saini, who scalped two wickets while conceding only 18 runs in his four overs quota, was named the man of the match at the Holkar Stadium in Indore – the very venue where he played against Vidarbha in the Ranji Trophy final back in 2018. Soon after, leggie Yuzvendra Chahal, who was not picked for the game, interviewed him (Saini) and Shardul Thakur on his famous Chahal TV and was all praise for his RCB colleague for his flawless yorkers. However, Chahal also took a cheeky dig at Saini by labelling him as ‘Yorker Queen’.

“Since Jasprit Bumrah is the yorker king, so are you yorker queen?” the ever-amusing Chahal joked.

MUST WATCH: @imShard and Navdeep Saini make their debut on CHAHAL TV 📺📺

India were eager to start their new year on a high note after the first game of the three-match T20I series was abandoned in Guwahati due to heavy downpour. Skipper Virat Kohli won the toss and chose to bowl first as the Indian bowlers put up a fantastic display, restricting the Lanka batsmen to 142 for nine wickets in 20 overs.

Although Saini was the star among the bowlers with his sensational figures of 4-0-18-2, Shardul Thakur also impressed the fans, picking up three wickets in the 19th over.

With a target of 143, openers Shikhar Dhawan and KL Rahul started the Indian innings brilliantly, with their 71 runs partnership. But after their dismissals, it was Virat Kohli and Shreyas Iyer who put up a 51-run stand for the third wicket, guiding India to a comfortable victory.

As for Sri Lanka, only Wanindu Hasaranga was the pick among their bowlers, with two wickets to his name in four overs.

The final game of the series will be played at the Maharashtra Cricket Association Stadium in Pune on Friday.

Sourav Ganguly: Rishabh Pant is a ‘special talent’ but selection depends on selectors