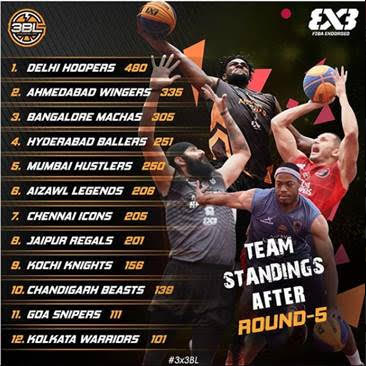 The finale of the inaugural season of 3×3 Pro Basketball League (3BL), the first ever FIBA recognized league in India, will be held at Phoenix Marketcity, Kurla in Mumbai on 25th and 26th August 2018. The sixth and final round of 3BL will see leading teams Delhi Hoopers, Ahmedabad Wingers and Bangalore Machas fight to establish dominance in the first season. The home team, Mumbai Hustlers were also strong in the fifth round, with a tremendous performance from Bikramjit Gill in the quarter-final match.

The fifth round held in Bangalore saw the immense success of 3BL among players and fans alike. With Bikramjit’s gameplay and skills, Mumbai Hustlers played incredibly well, but Delhi Hoopers remained leaders in the score charts, followed by Ahmedabad Wingers and Bangalore Machas. Surprise performances were seen from Aizawl Legends and Jaipur Regals as they put on strong fronts against the big teams and this round could be a chance for them to prove themselves.

3BL has provided Indian 3×3 basketball players with an opportunity to turn their passions into reality since its inception in June 2018. After emerging as champions of the third round, Delhi Hoopers got the chance to compete against world’s leading 3×3 teams and players in FIBA 3×3 World Tour, Utsunomiya Masters in July.

Grassroots level development of 3×3 basketball has been one of the pioneering objectives of 3BL. With the help of star players from various teams, coaching clinics for young students have been conducted in each of the cities 3BL has been in. Since 3×3 basketball has been introduced as an Olympic sport to be introduced at the 2020 Tokyo Olympics, efforts to increase chances of a medal from an Indian team have been upped.

Speaking about the upcoming round, Yoshiya Kato, Chairman, 3BL, said, “This is an emotional yet proud moment for all of us and we are working towards making the final round the best of the season. It has been an incredible journey till date and we are grateful to all our fans and supporters for the success we’ve seen in the previous five rounds. I am certain that 3BL has raised awareness about basketball in India, and we are hoping to introduce more 3×3 basketball opportunities in the future.”

Rohit Bakshi, League Commissioner, 3BL, said, “It has been a very exciting season so far and I’m happy to have seen the talent develop and grow over these past few months. India definitely has a lot of potential for a medal at the next Olympics and Commonwealth Games in 3×3 basketball.”

Vivek Krishna, Entertainment Director, 3BL said, “3BL is a very entertaining sport and we promise an even more passionate and enjoyable finale. Our supporters have stuck by us through the season and we are thrilled for the final round in Mumbai, the entertainment capital of the country. We will go heavy on entertainment contest on this round with a hip-hop dance-off, dunk performances by international dunkers and a lot more. We are sure the audiences are going to love the finale.”