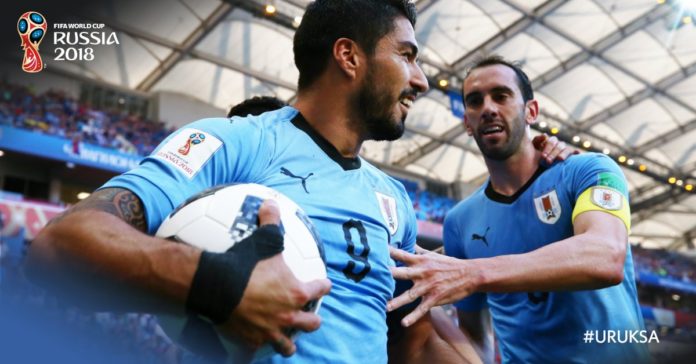 Luiz Suarez celebrates on his 100th appearance for Uruguay as his solitary goal help his team beat Saudi Arabia 1-0 today. This means that Saudi are the second team to get knocked out of the tournament after morocco. A spirited performance from the middle east team made it hard for Uruguay as they showed much more composure than last time and greater level of fitness on the pitch. Saudi created a few chances but the lack of finishing cost them the match. Interestingly Saudi Arabia had the majority of possession at the end of the game making more passes than Uruguay. This result also means that Egypt are also knocked out of the world cup. Earlier in the first half, Uruguay capitalized on a miserably defended corner that left Barcelona striker Luiz Suarez unmarked who had to just pass the ball into the net giving the South Americans the lead in the 23rd minute. 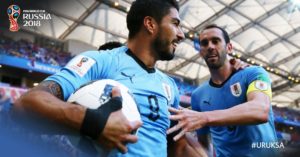 This sets up an interesting clash for Uruguay against the high flying Russians for their last match of the group stages. A hard fought defeat for the Saudi Arabian as they kept the potent partnership of Suarez and Cavani for the majority of the match except for the momentary lapse that cost them the game. With Saudi Arabia out, this ends the middle eastern representation in the world cup. Although, the Egypt vs Saudi Arabia clash will be a dead points match, high stakes will be involved as both will fight for higher place finish in the world cup.

Catch the highlights of the match here :